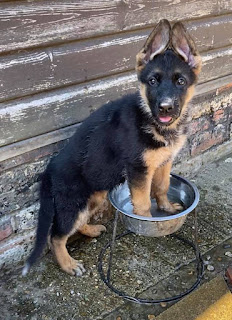 Last night things just got worse. I'd had a shower and was sitting out in my PJ's when I had a message to say there was a cat just like Isla down near Elna kennels. I was sent a photo, but I immediately told them the cat was too dark. But with distance and evening light in the photo I was doubting myself enough to get dressed and head down there. After all it was only 2 miles, you never know. Before I got to the village I had a call to say it wasn't Isla, it was a local male cat. Logically I knew it wasn't her, but I had still that glimmer of hope and again I sobbed my heart out when I got back. Seeing Steve waiting for news by the cottage really set me off, we must never forget his bond with her, she was really his cat!
Feeling emotional I turned to social media for comfort. Finding more photos of puppy Isla did the trick, and this one of her stood in her water bowl really amused me. She does look a lot like a female version of Orin, but with better eye colour. Orin was being naughty as usual and I was up and down checking he was not pushing his luck with Kaiah. Kaiah hasn't made any mistakes with him yet, but 5 weeks after her season she is quite hormonal and touchy, even Ross is getting daggers at times! 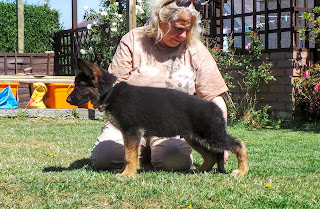 Anyway back on social media and up pops a notification that someone had commented on Orin's photo. Well my heart sank. The comment was not spiteful and simply agreed with something I had written, but shit I wish he hadn't said it ... I know it's not the best photos and I had considered long and hard before putting it on, but getting photos of pups in stance is so difficult and adding it to the album for my memory seemed appropriate. Now I wish I hadn't put it on at all, now the haters will see it and take great joy from the negativity ... I'm at the point of considering removing the photo from his album. Am I being over sensitive? Hell yes! I guess the person in question would be mortified at my over reaction ... but sometimes with other things going on in our lives we are just too fragile to cope and the slightest thing just pushes us over the edge.
Posted by Tali at 08:56

This must have been so difficult for you thinking that just maybe it could have been her and so sorry it wasn't . Don't take any pics of Orin off they are your memories despite what anyone said xx

It is very early, so forgive me, but, how many times have I jokingly told you never to criticize your own dogs publicly, as one of the less sensitive types will be all over it. Understand with a dog you will show, the potential is paramount, but you are setting yourself up for the jealous b~~~~~~~~ to have a go. Just saying xxxxxxxxxxxxxxxxxxxxxxxx

My comment was not about the actual dog Carrie - it was about the way he's stood and the person who responded was responding to that too. They would not criticise they puppy, but you are right the other one will.