Only The Good Die Young.... 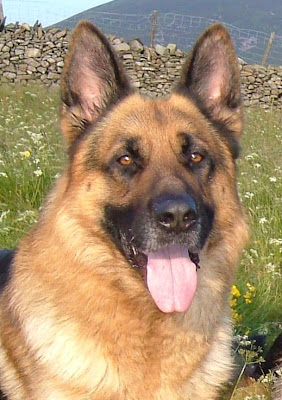 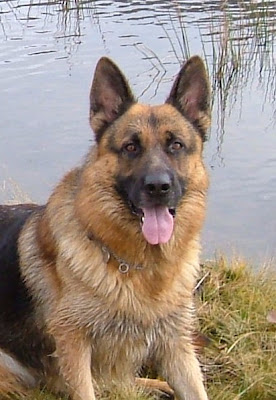 Well maybe not!!! God bless the naughty, spirited, loud, mischievous Captain Chaos. Thank You Jay for all you gave me. It's hard to believe it's been two years...
Posted by Tali at 10:56 No comments: 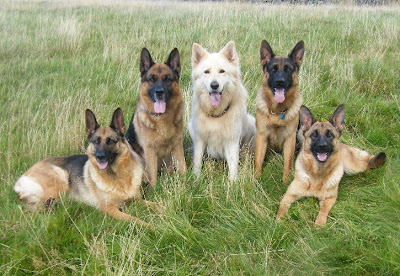 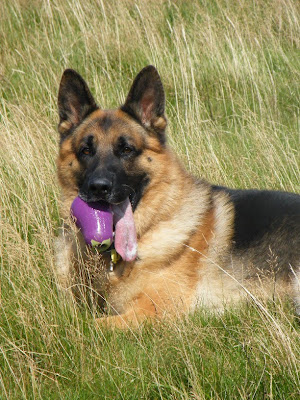 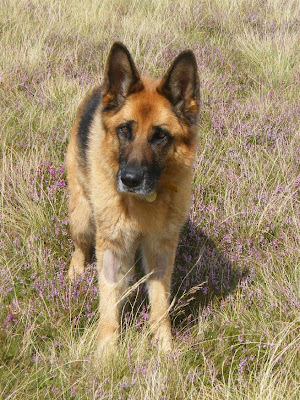 Storm had been doing so well. She returned home on Wednesday. For a bitch who had almost died 36 hrs earlier, She was truly remarkable. She was hungry, bright and happy. We took her for a check up on Friday, her temperature was a little high but generally the vet was happy with her progress. He gave her an injection of antibiotics to boost the tablets she was already on and hopefully bring the temperature down.
As I set off at 6.15am on Saturday for WKC in Builth all seemed well at home. But by 10am Storm had deteriorated rapidly and Steve had to rush her to the vets. The vet said she had a very high temp probably from an infection. She's was very flat, seemed in pain and bloated. She stood hunched with her tail tucked tightly underneath her. I feel I let her down by not being here. I thought of coming home from the show but felt that would have been undermining to Steve who I have complete faith in to deal with any emergency. Also I was not just 30 min's from home..Still at the show I felt useless and lost. On Sunday Storm was not much better and we where both very concerned.
We returned to the vet on Monday where Storm was diagnosed with peritonitis! What next???? She had loads of injections, pain killers, antibiotics and something els to help her stomach with the swelling. Poor Storm really didn't deserve this after all she'd been through, but I guess one positive note her temp was down from Saturdays.
Today we have been back to the vets. Though her temp was normal she still seems in discomfort. She's such a strange shape, really thin on the back, you can feel every bone of her spine, and underneath she is bloated, almost barrel shape. She has very little appetite and I wish I could see more improvement...
Posted by Tali at 20:34 No comments: 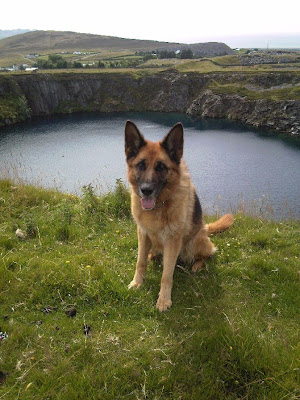 Last night was another night from hell...Storm had an 180% twist torsion. Her Spleen was bleeding and enlarged because it was caught up in the twist. She's survived her Op...We pray to God she doesn't go into shock now.... Mikey is my hero for sounding the alarm!
It was just a normal evening in the "Blanik" household. Storm had been relaxing indoors since about 5pm. At around 9pm I put her out in the yard, she always goes out for about hour around this time. It was about 9.45 when Mikey started to get agitated. He paced from me to the door and back again...over and over. Thinking he needed to go out I eventually took notice of him and took him out. Whether Mikey could hear her distress or not we'll never know, but one thing I do know is, that without him it would have been a further 20 mins or so before I went to get Storm in. And with torsion, as we all know time is of the essence.
As soon as I saw Storm I knew something was wrong. I had seen torsion before but wasn't yet convinced that that's was what was going on. Blade's torsions had been much more distressing to watch, he had been panting, gaging and retching. Storm was quite and subdued, but I could see the pain in her eyes, I just knew something was seriously wrong. By the time we got to the vets she had started to swell, but she was still....just quiet. At that time of night the vet was alone. We helped him sedate her and attach the drip to try and counteract the shock. We stayed as long as we could help...leaving only for the man to get on with his job.
We had been home about 30mins when we got the call to say she had survived the operation, but we where warned that we where not out of the woods yet...With every hour I feel more positive for her recovery, still another sleepless night is ahead for both of us. Tomorrow I hope brings good news....
Posted by Tali at 19:37 1 comment:

"Excuse me... coming through...What's down there? And watch my leg with that lead!"

"Well I'll just stand here then...nobody can say I'm in the bloody way here...bet they can't even see me....and I was only trying to help!"

I Still Love You 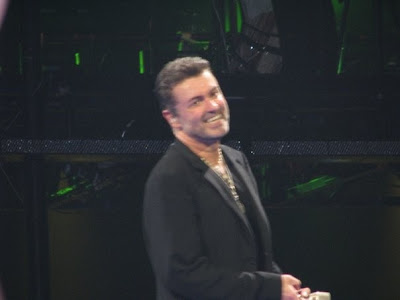 Sometimes I Get To Feelin'

I Was Back In The Old Days - Long Ago

Thing Seemed So Perfect - You Know

The Days Were Endless We Were Crazy We Were Young

The Sun Was Always Shinin' - We Just Lived For Fun

Sometimes It Seems Like Lately - I Just Don't Know

The Rest Of My Life's Been Just A Show

Those Were The Days Of Our Lives

The Bad Things In Life Were So Few

Those Days Are All Gone Now But One Thing Is True

When I Look And I Find I Still Love You

Ain't That A Shame

When Life Was Just A Game

No Use In Sitting And Thinkin' On What You Did

When You Can Lay Back And Enjoy It Through Your Kids

Sometimes It Seems Like Lately - I Just Don't Know

Better Sit Back And Go With The Flow

Cos These Are The Days Of Our Lives

They've Flown In The Swiftness Of Time

These Days Are All Gone Now But Some Things Remain

When I Look And I Find No Change

Those Were The Days Of Our Lives - Yeah

The Bad Things In Life Were So Few

Those Days Are All Gone Now But One Thing's Still True

When I Look And I Find

I Still Love You