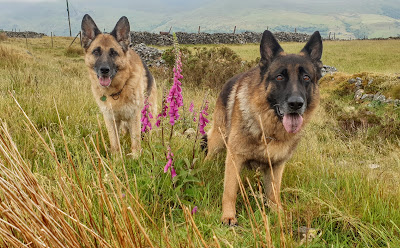 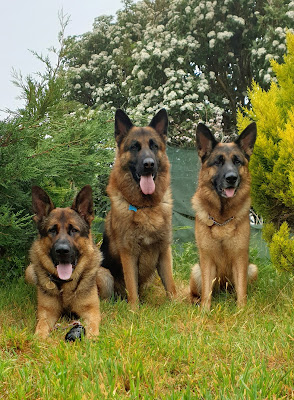 You would never believe from seeing a photo like this that Steve and I have both been in tears today as we discussed our increasing struggle with Loki. His moods are becoming unbearable. It's so hard to know how to respond to him. Shouting, which is usually my best tool with the dogs, well my voice anyway, makes it worse as he then becomes fearful as well as moody, but his continued growling at Ross can not be left unchecked. Ross is such a happy clown but even he is becoming uncomfortable with the situation. I've said before that Loki just does not have the strength of character to be the oldest male in his pack, but Ross has not even attempted to push his way up the pack, he's just happy being Ross. Separating Loki from the others in the evening has given us some time to relax, but with the growling now starting from early morning it only causes for a stressful day.
Loki's issue does seem mostly to be connected to Ross. But why? Ross isn't interested in him, he's happy with his kong and his Kaiah. Loki never seems to be able to relax, he's constantly on edge, the working lines in his breeding maybe? He is the only dog I've had with working bloodlines, and there is no doubts he is different to my home bred showline guys, maybe it's to do with breeding?  Don't get me wrong with us he is affectionate, loyal and obedient, I trust him with the bitches and as far as you can trust any dog with a pup, I trust him with Orin ... but this continued tension and growling really does take it toll on the rest of us. 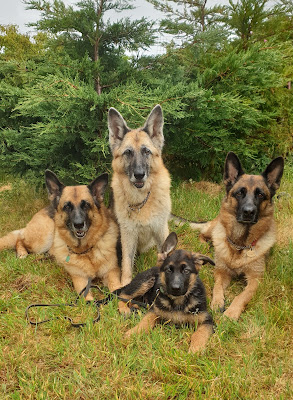 As you can see Orin is attached to a lead! I tried three times with a treat to get him to wait, three times he ran away. There was no fourth opportunity to get it wrong. I'll be taking a lead out with me now and hopefully he can get it right first time and get a reward ... he seems quite a sensitive chap and does sulk when things don't go his way, he doesn't get that from his mother!!!!
Posted by Tali at 15:47

Must be a worry for you with Loki it's such shame he's doing this and not doing himself any favours. He's such a lovely dog and I think the world of him but hard for you at times. xx