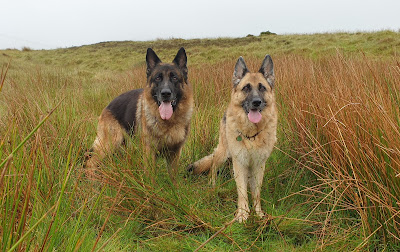 Walk one was dry..ish and it was great to be out on a deserted mountain. Jezi had her awkward head on and we had words, I convinced her I was right and she decided she may as well listen then! 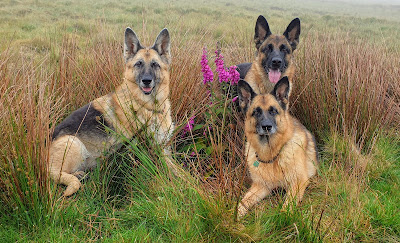 The rain and mist soon returned and Sammi kept spooking me with her air scenting and pointing. I swear I couldn't see a soul. With the visibility being poor I was on edge, though her obedience was spot on so I didn't need a lead I knew she would be right and somewhere out there there was something. As I turned to go down hill Nico barked in the van, I could just about make out the shape of the van and then I caught a glimpse of a figure dressed in black carrying what I can only think was an orange bag! You see she is always right! 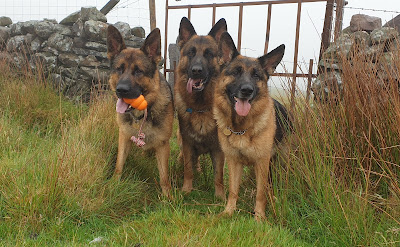 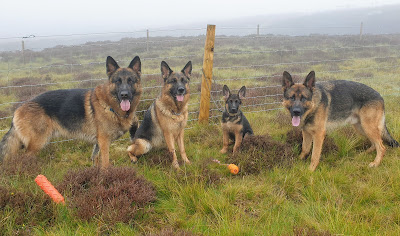 The first soaking of Orin's young life. I think he was highly amused by the rain and wet grass but he wasn't so sure of the ditches and puddles, he walked round them. To be fair he's never seen them before, but he does go in the lake. One quick photo as a group, it's easier to tie him to the fence and give him a treat than work on "Wait" in this weather. As I returned to give them a treat I gave Kaiah hers and then gave him one at which point Kaiah came over to see if there was any more. Well the little shit had a go at her .. WHAT?  Luckily for him it went over her head, but it didn't go over mine! I already had my hand in his collar as I was realising the lead so I had the perfect opportunity to address it. Instinctively I growled a "AHHH" at him and I followed it by some angry choice words, simultaneously I had slightly lifted his front off the floor by the collar, pushing his bum into a sit. His ears went back and his expression melted, I imagined him thinking "Ooops I got that wrong." I was happy that I had instinctively dealt with the situation correctly, had I let it go he would only do it again .. and again. He's such a bright spark and quick to learn, but at this stage bad habits can be learned as well as good ones. To be honest he was lucky I dealt with it and not Kaiah, I doubt she would have let him off with it that easily. I don't feel he needs to be squashed, I hate robot puppies and dogs but now is the time to teach manners and be consistent about it. It's important to deal with each individual situation as they arise, once it's passed it's too late. Like I said he is such bright sparks and like all the others given half a chance he will get one up on us. 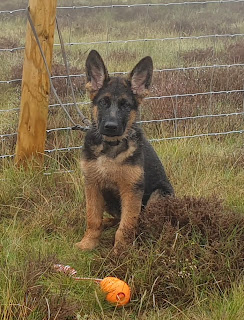 Lovely pics as ever and as you say when Sammi air scents there's always someone there and ye of course she was right. Well little Orin it's a good job Mrs S told you off and not Kaiah !!!!! but young man you'll learn to be a good boy as you wont get away with not being and I know you'll be good cos you're so lovely x