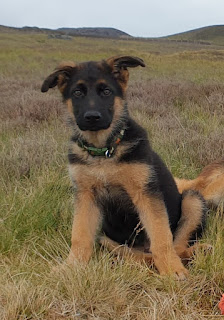 It's 12 weeks but not three months .. lol. It always confuses me but I get there in the end. Orin decided as he was born at 6.30pm we should post at 6.30pm. Don't worry I've not lost my marbles and I'm not sitting here watch the clock preparing to press "publish" as the clock strikes  ... not even I'm that daft, honest, it's a scheduled post!
Orin weighs 11.3kg today which I'm pleased with, though I was really taken aback to find out his brother Loki is 11.12kg. Good going there young man. Anyway I would love Orin to be touching 13kg by 3 months, I'll get him weighed at the vets next week which will be more accurate  - I'm sure there is a chance he'll get there. Ross and Kyle just fell short, with Ross being 12.6kg and Kyle 12.9kg. (Kyle is Kaiah's brother) Loki was heavier by then at 13.8kg. Kaiah was still a little fatty at 12.7kg, but she did level out and now weighs 10kg less than Loki and Ross. 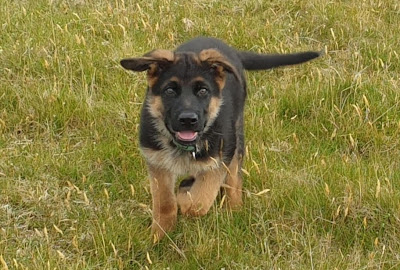 Has anyone any idea what I was referring to in yesterday's post? Well look at him, he has a line of "sticky -up" fur like a parting straight down his forehead. It's been there a fair few weeks, but to be honest is only really noticeable in photos. I'm so surprised the die hard GSD folk have not noticed it, I must be far more observant than some of them because I would have done.
I know I've already published this photo yesterday but I love it so much and want it included in my memories of what he looked like today - 12 weeks, but not 3 months!
Posted by Tali at 18:30

Ha ha so glad you have fessed up about Orin!