What A Difference A Ear Makes! 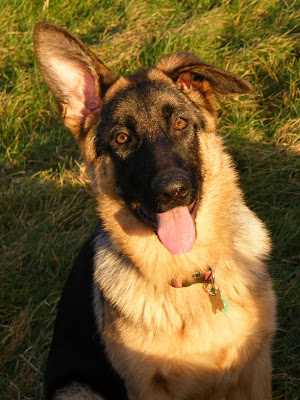 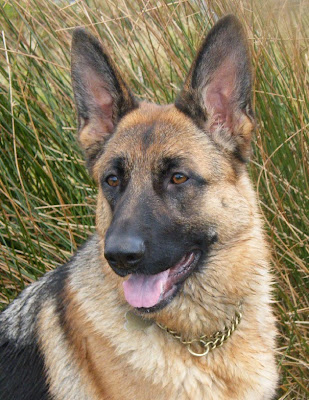 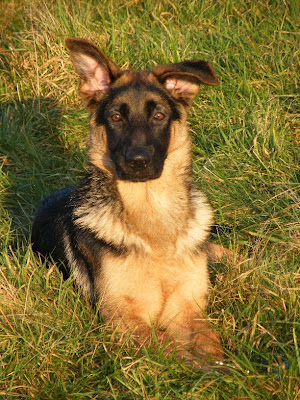 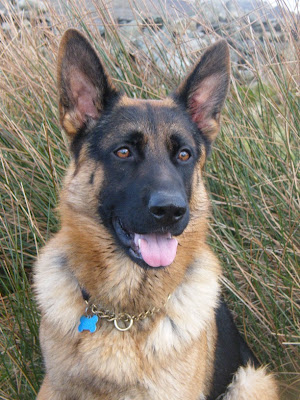 One Year On exactly...

....Well almost! And what a year it's been. Asha and Mikey are both growing into lovely outgoing young adults and are having a successful show career. I'm proud of both of you
Crufts here we come! 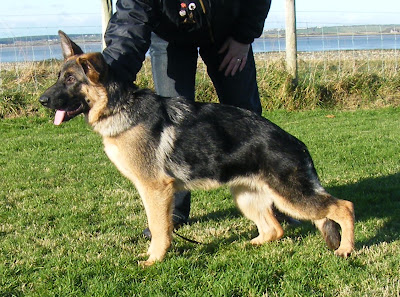 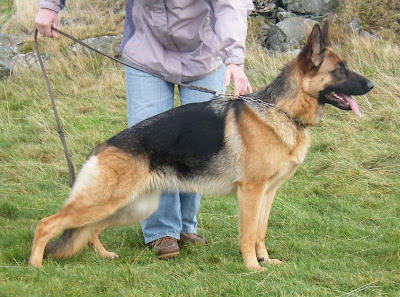 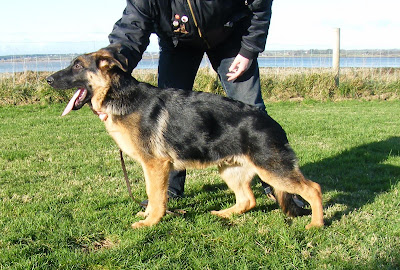 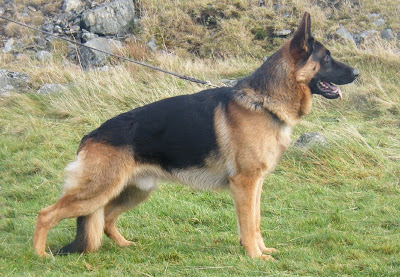 A friend who I simply know as Whisper once told me that I write beautiful tributes for my dogs, but that I should try writing for the living and not just the dead…so, mad, bad, scary Whisper, where ever you are now… here goes….

Louis arrived in the world sometime during the sweltering heat of 21st of July 2003. The first litter for us since 2000, 7 boys and 1 girl where born to our beautiful Krizzie.
I quickly got over the disappointment of the only bitch in the litter being a long coat and decided that I would keep a male…after all Daddy Jay was a really handsome chap!
Two of the boys where long coated but the other five where pretty equal in quality, but 2 kept catching my eye. Tom was the biggest pup in the litter and Jerry the smallest. Tom was indeed a very promising masculine young man, but something about little Jerry excited me. I loved his charisma, his presence, his attitude and his very cuddly nature. But still uncertain of my facts two champ show judges came to visit the litter and to help me pick the pup with most “show potential.” Both picked Tom, with one placing Nat in second place and Jerry in 3rd place. So I was wrong then…or was I?
Over the next few days my heart argued with my head, I tried to focus on Tom and not look at little Jerry. But with tears in my eyes one morning I told Steve how I felt about Jerry, he said “well keep him then. If you make a mistake then it’ll be your own mistake.” It was like a weight lifted off my shoulder…the conformation I needed…Yes I would keep little Jerry, he would become Blanik Excentrik, my Lovely Louis.

The little man charmed me but over the next few months I would cry and worry so much over my little friend. Louis was never really any trouble, he loved the world and saw no harm in anyone or anything…a trait which has stayed with him till this day. But Louis had no interest in food, he would go on hunger strike for as long as 36 hours at a time. The more I worried and stressed the less he ate, so the more I worried. He was still also very small, and didn't seem to be growing....so I cried. But how would he ever grow if he didn’t eat? I persuaded Steve to make me a measuring stick, big mistake I became obsessive about measuring him, this weekly ritual became almost a daily one! But Louis didn’t care, he was just a such happy chappy!
When he was 6months old he measured only 55cm at the wither, I decided to take him to visit the vet for a check up. She assured me that there was nothing wrong with him, he was just small and I had to like it or lump it! So I cried…again, and by now I was even starting to bore my myself so it must have been awful for those around me! In January when he was just 6months old I took him to a canine society show….he was last in a GSD Graduate class and with his size I could see why. I remember standing outside the ring and telling a friend, look that man, he is talking about Louis. (He was a GSD judge visiting the show) With my frame of mind being low at the time I thought he was simply pulling him to pieces, my heart was heavy, again I could have cried, and probably almost did! But later in the day the same man approached me and said, “you have a lovely puppy here, lovely head and colour, great coat, great body shape and a fantastic outgoing character, but…” yeah you know what's coming… “I would worry about the size, I do hope he grows for you, he’s the nicest puppy I’ve seen in a long time.” After my initial disappointment I came home with a little hope in my heart. When he was 10 months old this same judge offered to buy Louis from me, though I was flattered there was no way I would part with him. And two years later I gave him the chance to put his money where his mouth was, I enterd Louis under him at a show, he gave him Best Of Breed!
Importantly though, through-out all of my early worries, one thing never ever changed. I loved the bones of Louis and would never, ever have parted with him. I have never, not for one minute regretted my decision to keep him. He is my prince charming, My Mr Amazing, and now following in his grandmothers footsteps he is my very special friend . At 7 months Louis was 59cm and as an adult he has made 62.5cm. Actually, closer to the correct size than many a male that stands next to him in the show ring. At 8 months old he gained his first Best of Breed and by the end of the year he was joint 7th top winning German Shepherd Male Puppy being unbeaten in all his breed puppy classes both at Championship and Open shows level. I think the highlight for me was when Louis went Best Puppy Dog at Three Counties Champ show under Gary Gray. Wow.. What a ride we had that year… and the little man loved every moment of it!
As he grew older Louis gained more friends, or maybe they where just a lap to sit on. Many a time he has embarrassed me and sat on a strangers lap at a show..after all he can’t possibly sit on the floor! And though he is still little Louis to me, to most other people he is an “Alsatian!” His enthusiasm and presence in the ring has gained him many a first prize I’m sure, and his love of life will only enhance his chances of winning. 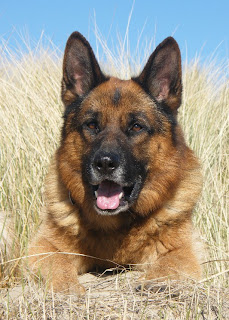 When Tali was born in January of 2005, no doubts Louis was initially put out by the presence of this cheeky young lady in the pack, and to loose some of his mothers affection was also a bit of a shock to him. But within no time he had accepted his little sister, but thank god he did not join her in her mischief making. After Louis, Tali was indeed a culture shock, the real puppy from hell!
Over the years in the show ring Louis has continued to go from strength to strength, with numerous Best of Breeds, Best In Shows and Champ show wins to his name. He has also achieved his Bronze and Silver K.C Good Citizen Dog Scheme certificates. But now as he approaches middle age he will unfortunately have to take a little step back for the youngsters to get their foot in the door. I dread the show days when I have to leave without him. He will be heartbroken as these are his “special” days with me. It will surely be strange to come home from a show without the odd Louis love-bite or two!
Sometimes I fear what is ahead for me. The years creep up on us quickly and the pup is all too soon a mature adult, and then frighteningly a veteran before we've even thought about it. Sometimes now I look at Louis as he's growing his grey beard and I dread the day when he will no longer be by my side. In a weak moment I hug him and cry but then I know I can't let these thoughts ruin the years of love and fun we hopefully still have left to share together.

Your Sex Is On Fire 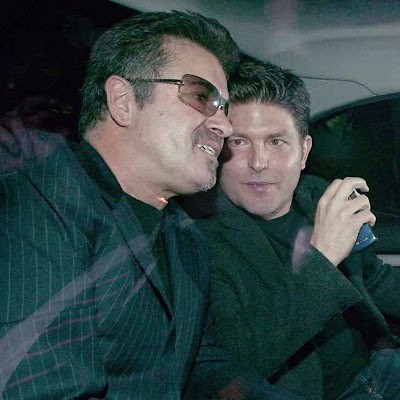 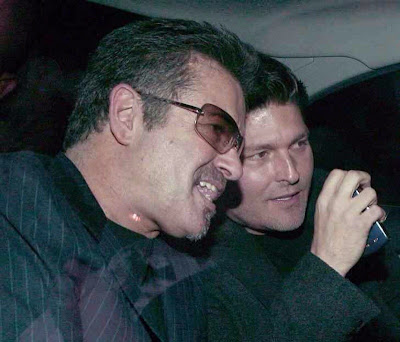 Oh No...Will she ever get the hint? 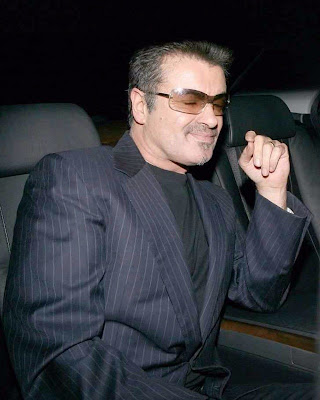 If I close my eyes maybe she'll go away.. 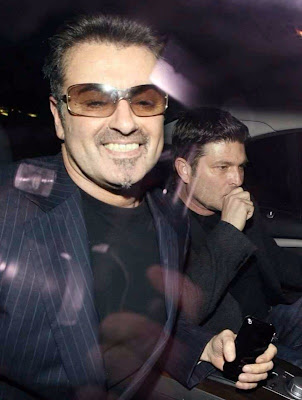 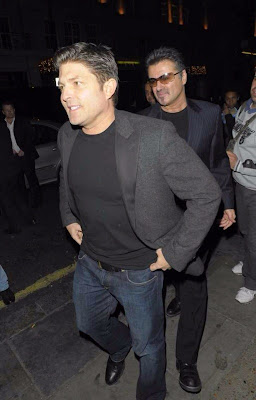 Oh No, KT's with her, and you know what that means for you...Quick Darlin' run....and pick ur pants
up or it'll be the naughty chair again!
Posted by Tali at 20:39 No comments:

Kiri, Kai and Maya enjoying their time at the lake today 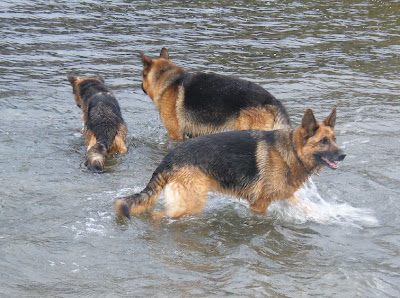 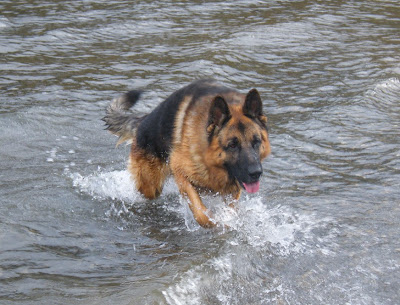 ...and his daughter Maya

The Kids
one pic then we're off
Asha, Louis, Finlay, Mikey and Tali

Who built a swimming pool on our mountain?
Finlay and the Pups 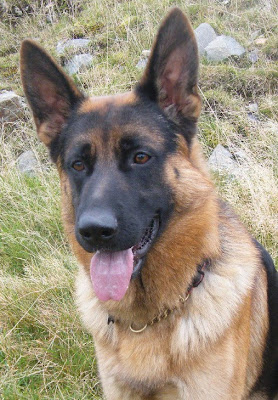 You forgot my picture! I'm not with Mummy Tali, Daddy Kai and Asha in their pictures! That's not fair cause I won Best Of Breed last Saturday! Aren't I handsome...aren't I just...Mr Mikey.
Posted by Tali at 19:58 No comments:

I think It Could Be Mine!!! 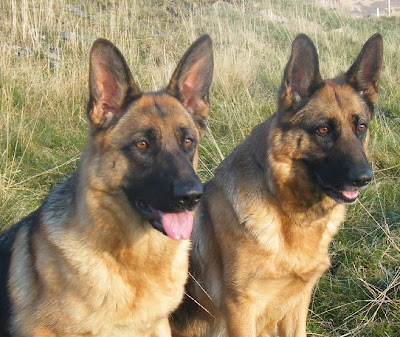 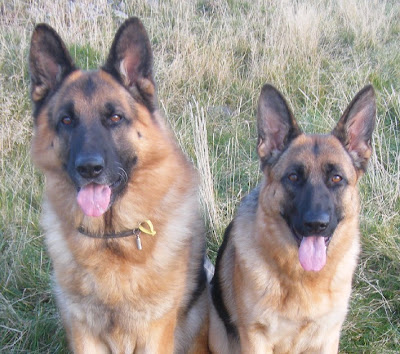 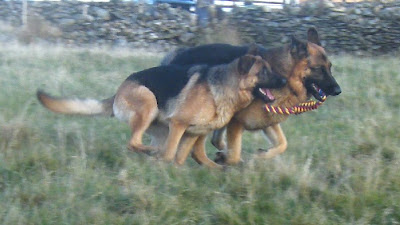 Daddy I Want That Toy! 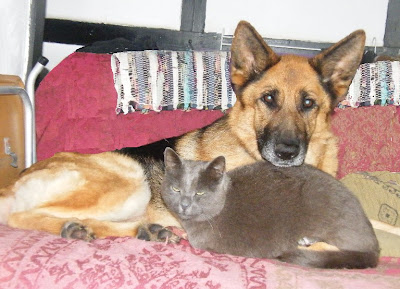 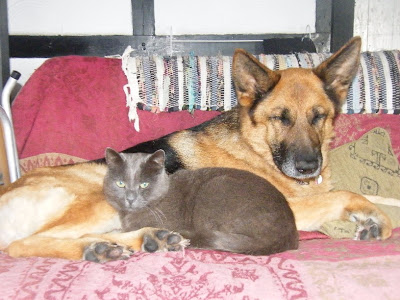 SHhhhhh...caught sleeping together....again! Don't tell anyone i'ts a secret!!!
Posted by Tali at 13:46 No comments: