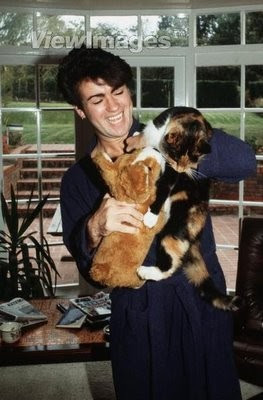 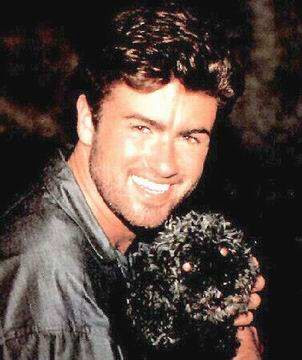 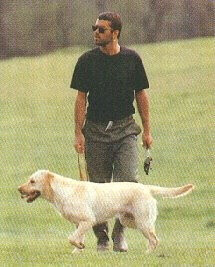 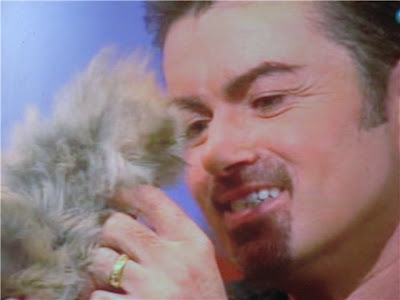 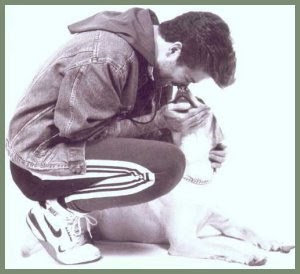 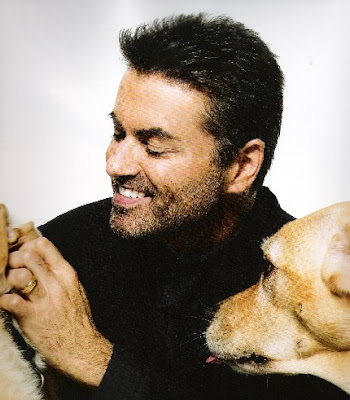 "So," I thought, what is it about George Michael fans? Why are the majority of us animal lovers? What is it that draws us all together and keeps us all so happy in GMF?
Surely it's mutual kindness, compassion, gentleness and love, just like our man.
The beautiful boy grew into a wonderful man.
Just look at the pictures.....enough said me ffinks!!!! 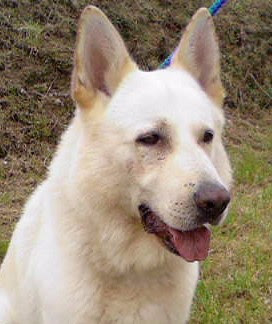 This week Celt was taken into the vets to be put to sleep, he had been chasing sheep and his owners felt that this drastic action was the solution. I'm well aware that this is a serious offence in rural Wales; but does the blame lie here with the dog, or the owners ignorance or maybe incompetence? After all who walks a dog off the lead through a field full of sheep without being totally in control of the situation? Luckily my friend Sharon who is a receptionist at the vets persuaded the owners to allow her to try and re-home the dog. Her care and compassion for this dog (and many others) was both genuine and touching.
Celt was a 5 year old unentered male with a nice temperament. He was good with people and cats, though "apparently" slightly unsure of other dogs he had lived happily in the company of another. The prospects for re-homing seemed favorable, that was until on further inspection from the vets it was discovered that the dog had Anal Furunculosis. The owner had given a donation towards the dogs future, this would be used towards the initial cost of his treatment.
I'm lucky, I haven't had much experience with A.F, and hope I never will. I've only known 2 dogs who have suffered from the condition. The first female was 8 yrs old at the time of her diagnosis, her owner opted for surgery; at the age of 12 she was doing well and had had no re-occurrence of the condition. The other was also an older bitch, her condition was well controlled with medication. Obviously this is not always the case but Sharon and I both felt that this dog deserved a chance. Initially the vet felt that Celt was in the early stages of A.F and was optimistic about his future. He said that with this new drug which is cyclosporine based there is now an 80-90% success rate. We discussed surgery which would mean removal of the anal sacks and cryo surgery but he felt "at this time" it was not the best road to follow with Celt. All we could do was give Celt a chance and follow the vets advice.
Arrangements where made to move Celt from the surgery where he had been staying, to a boarding kennels. GSD Rescue had kindly offered to help out with the boarding fees and GSD helpline where going to provide a neutering voucher. Quite a few people where now getting together to help this boy on the road to recovery and the prospects of a new life.
Sadly before vaccinating Celt a vet at the same practice made a more obtrusive examination and found that the condition was far more serious than at first thought. There where numerous lesions in his anal passage. But isn't that the trouble with AF? It looks fine on the surface, but underneath its a nightmare. The disease tracks deep into the tissues, destroys everything in its path, and wont allow itself to heal. It was felt that it was kinder to let him go now before he started suffering. I am sure this was the right decision to make for Celt ~And just for a little while at least he has some real friends fighting his corner. I feel very sad, and Sharon is devastated at the unnecessary death of another lovely dog. If only he'd been diagnosed months ago, if he'd been treated earlier then he would have at least had a fighting chance.
Briefly to end...We are thank full for all the advice and all that we have learnt which may help us in the care of others who are in need in the future.
Nos Da Celt.