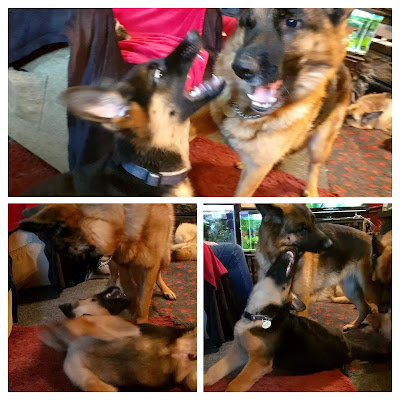 Over the Spring Kaiah didn't time things well and came into season on the 10th of April. Luckily for us the weather was good at the time so Loki and Ross got to spend time out in the kennels whilst the pups were in the front garden. Following season, during the time they are pregnant most bitches are often different, a little moody maybe, and Kaiah lack her usual spark and is more cuddly than normal. According to my records had she been mated then this weekend would have been the time of their arrival, and already things are changing.
Kaiah relationship with Orin has been Ok, during a difficult time for her she has more than tolerated him. To be fair she's not put a foot wrong, but she had not really taken much notice of him either. Well last night she decided she may like to get to know her little brother. A short game which she instigated was a joy to see. Not that there are major changes with Kaiah after seasons but hormonaly now she will be normal until her next season in October ... watch out Orin you may have met your match!
Posted by Tali at 09:24

That is just so sweet, and I love the little yelp asking her to continue. I have to say it, this is making me so sad, Orin being the first puppy of yours that I have not yet met, or had fun in my garden with. I am just so confused now as to what we can and cannot do, obviously I am still shielding, whatever that is supposed to mean, and your hydrangea is just about to flower. Any thoughts? Cx
C

Carrie I will e.mail you ... but it is very much your call, you have to feel comfortable and safe in what you do.

So lovely to see them playing together pics are wonderful ❤️