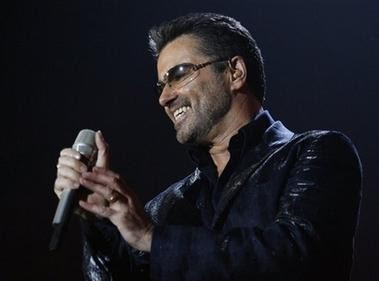 “Get the phone” Steve shouted. I flinched at the familiar number on the caller display unit, but hell I was brave that day, I could speak to her, so foolishly I answered the call. To protect the innocent we’ll call her Anna, though obviously that’s not her real name. Really it’s not necessary to hide her name as I doubt she will ever find her way here, technology has past her by, but still, just incase!!!
Pleasantries and German Shepherd talk over and she moves in for the kill
Anna- “So what do you think of your George Michael then?”
Now don’t doubt it, normally to hear him called “My George” would have been a dream come true but in this context it sent shivers of fear down my spine.
Me -“Well you know what I think of George, do you want me to spell it out to you again?”
George had been the subject of many heated discussions between us. Anna is without doubt a racist, and a homophobic; well basically she hates anyone who isn’t white, British and heterosexual. She just can’t cope with anyone who is outside her own limited comfort zone of normality.
Anna- “don’t be silly I mean the the cocktail of drugs, stupid man I always told you he was a wrong one. Men like him make my skin crawl.”
Me -“Excuse me? You know nothing about this man” I answered calmly “and I guess you never bothered to look into it, you just read the Sun like millions of others, and believed every word you read.
Anna – “Well he went driving in the middle of the night, wasted on drugs, and probably drunk as well.”
My temperature was gradually rising but I couldn’t help but snigger at her use of the word “wasted. ” Anna is a lot older than me so she would have definitely only read the word in this context in the Sun or another of this country’s low life gutter press.
Me-“Oh Anna to quote the man himself, same old same old” I replied knowing it would go straight over her head. “Why for once in your life can you not see past your own ridiculous prejudice and see the good this man is doing for so many people like me? Why do conversations have to revolve around his personal life time and time again? Close your eyes and listen to his words, and if they’re not for you then just leave me alone to be happy loving him. I don’t ask for your opinion of him, I never have and I never force my opinion of him on you; so why do you find it necessary to always bring him up in conversation?
Before she could get a word in I continued
“And what’s more if you are my friend then why can you not see that when you continuously insulting the man I admire it hurts me. Or is that part of the game, lets pick on Rhi and see her squirm. Well I will squirm no more. I am proud to be a George Michael fan. I am proud of George both for his work, and the way he deals with his personal life. When George makes a mistake, he proves to us all just how much of a man he really is, he’s always the first to put his hand up and say, ‘I was wrong.’
Anna sighed before adding her ten pence worth, “ Oh dear, take you rose tinted glasses off and see the situation for what it really is, I see a drug taking poof has been who can’t sing for toffee and gets his picture in the paper for all his misdemeanours.”
Quietly I answered “Yes Anna I guess that’s what you would see!!!!”The phone clicked off as I put the receiver down. What was the point? After all why waste my breath on trying to explain to someone who really does not want to understand?
Posted by Tali at 19:13 1 comment: