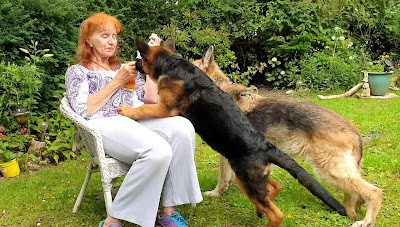 What have you got to eat Auntie Carrie? 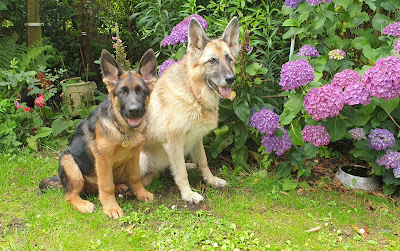 By the beautiful hydrangea 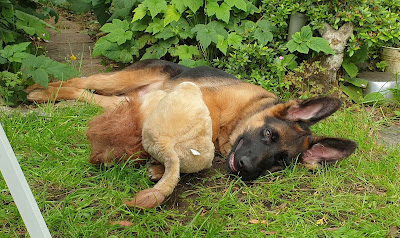 Orin happily tired with stolen Mr Lion after another successful visit.
He was praised so much I think he'll be hard to live with for the rest of the day.
Thank you for having us over.
Posted by Tali at 16:04 No comments: 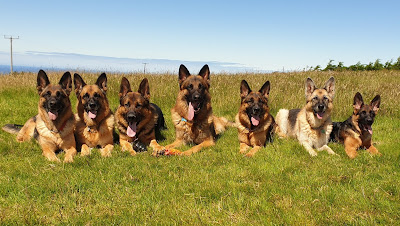 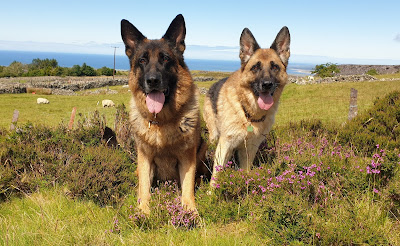 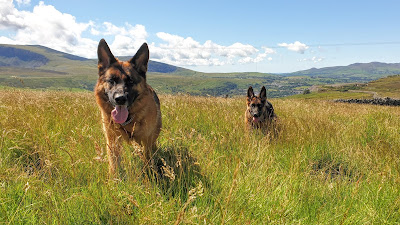 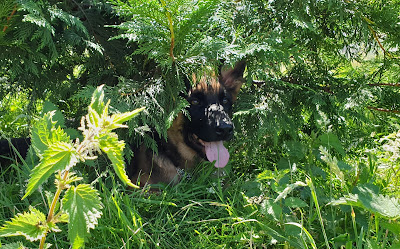 Music added to hide my profanity when Ross jumps on me 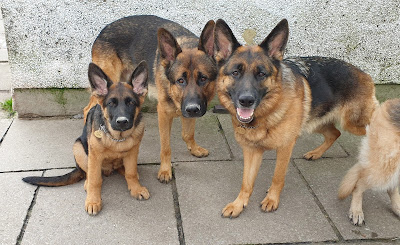 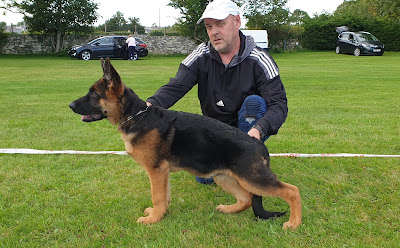 I'm absolutely over the moon with this photo taken at Ring Craft tonight. Baby boy looks so good. Thanks Ian and Paula S for your time and patience.  A photo, a memory to treasure.
Over night my lovely friend Bethan cleared the ring tape and drove away the cars. Haha. Steve was gobsmacked I hadn't done it myself, but the car behind the ears would have caused me some difficulties. Now a wonderful photo is even better! 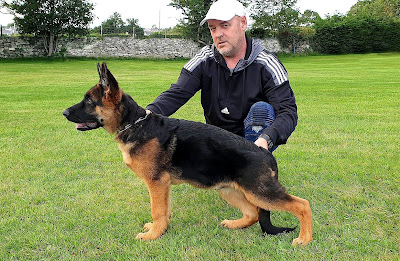 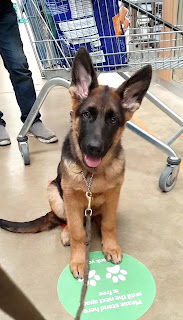 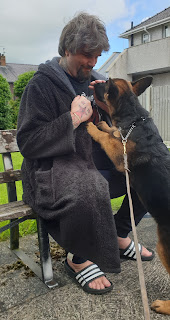 This mornings adventure - A trip to Pets At Home, a weigh in and visiting Ed.
Orin did well, I could feel a little tension from him when we first walked into the store but equally I could feel him relax in minutes as we walked around the shop. Anyway he weighed 17.4 KG so I doubt now he'll be over 20kg by 4 months like Loki was, but may well be on a par with Ross and Mikey who were close to 19.5kg. Anyway the purpose of the trip was to get food for Asha. I thought I'd try Fishmongers white fish and potato, having used it at Freshfields and with Louis I found it to be excellent food. If it doesn't work I may consider a home made/cooked diet ... with 10kg of this we should know where we stand before considering another bag.
We then went on to visit Ed (Stepson) and sat out with him for about 20 mins. I hadn't seen Ed since the beginning of March  and it was lovely to sit out in the garden behind his flat. Ed was calm, as is his nature, and let Orin go over to him when he was ready, as you can see it worked well. I decided to take Ross with me, he was not calm or quiet but really I hope Orin will pick up on his happy go lucky nature ... I'd sooner have two clowns at the party any day! Apologise to the residence but you now have a hole in your lawn! Ooops .. I stopped him as soon as I spotted him ... honest!
Orin getting close to Ed but watching Ross shouting
"Will someone please throw the bloody kong!" 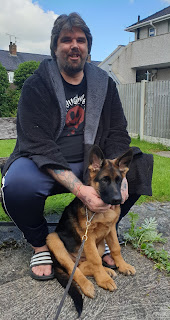 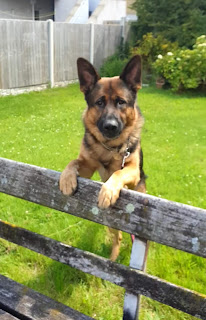 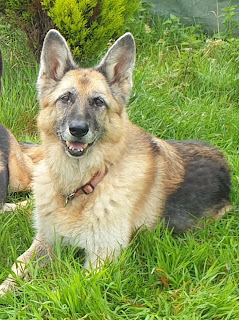 We have been controlling Asha's bowel disorder with metranizadol for a few weeks. A week on a week off had been going well, but the last couple of times she's managed less time off them before the diarrhea returned. This all started late last year and it was my choice to try and control the symptoms and give the old lady good quality of life rather than go for intrusive tests. If this system is not going to work then I have to reconsider my options.
At the risk of totally contradicting myself, Asha is so well but there is obviously something wrong with her. What I mean is, she is 12 years old, she has no mobility issues, no obvious sight or hearing losses, she looks well she eats well... as usual! Saying that I've no idea what is going on inside her, there must be a reason for this recurring diarrhea and at her age I felt managing it was the best way forward, but now we don't seem to be managing it.
I've decided to start by reconsider her feeding and to again try a 5 day course of panacur for any parasites that she could have picked up with the rubbish she eats. If there is no improvement I will talk to the vets about blood tests and stool samples, but anything intrusive at her age is just not happening.
Posted by Tali at 18:05 1 comment: 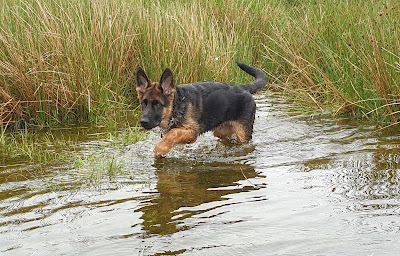 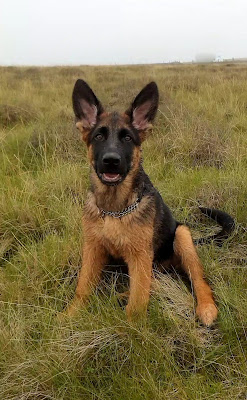 Isn't he lovely - How could I not be proud!
I'm down to my last 2 kg of puppy food and I've decided not to buy another bag of it. I've mixed in 2kg of Titanium with the puppy food to push me on and also so that the change over will be gradual and easier on his stomach. Mind you he does seem to be able to eat most things without an upset. I know it's a little earlier than normal to transfer him but Titanium recommends from 4 months on and when you think about it raw fed puppies only ever get the same as adults, only the quantity changes.
Posted by Tali at 16:16 1 comment:

Some Of The K Pups Merlin with his mate Dexter 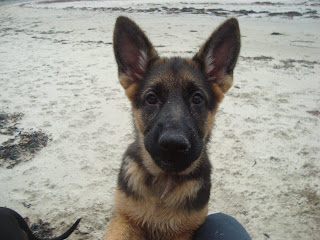 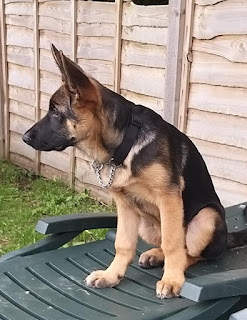 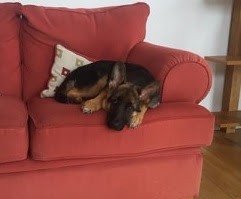 Fly
I think I'll nag everyone for some nice 4 month photos for the album next week.
Posted by Tali at 16:10 1 comment:

And we had lots of fun 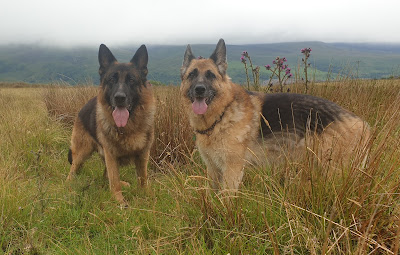 Half the Nantlle Ridge has disappeared 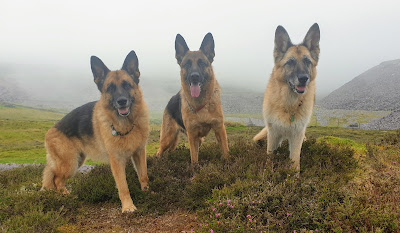 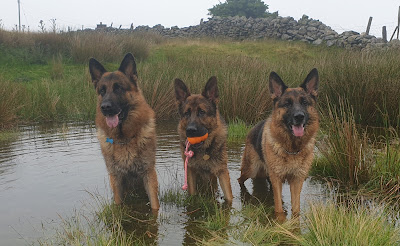 There hasn't been water here since about February 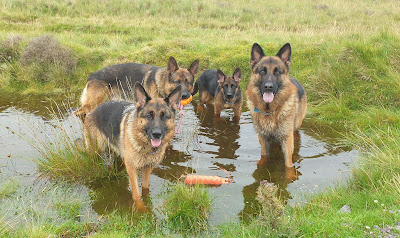 Orin likes the water as long as Ross is not splashing about too much!
Posted by Tali at 15:59 1 comment:

Another restless night, fatigue is such a crazy thing. I feel I could sleep on a washing line and can hardly function during the day,  but when the option is there for a full nights sleep, well it's just not possible for me to switch this frustrating brain off! 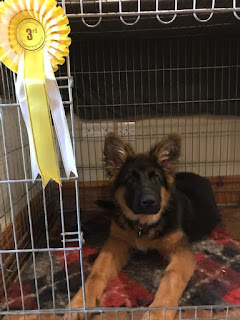 I started thinking about Kaiah and the future plans. You know logically I can't see me getting to Suffolk in November. I think Plan A will have to go on the back burner, but I think Plan B will definitely go ahead. The thought of more Sisco kids appeals anyway, I am a huge fan of his! The puppy enquiries I'm getting are still crazy, it seems people are really struggling to get a well bred puppy at a sensible price.
I know for a fact that Kaiah carries the LSH gene, I considered that at length before mating her to Zalu . At 1am trying to remember the percentages of LSH born from S.C parents took some doing, but I got there. (Long Stock Hair is now the correct term for Long Coat... apparently!) If one parent is a LSH and one a SC who carries the gene then 50% will be LSH and 50% will be S.C but will carry the gene. If both parents are S.C and carry the LSH gene then 50% of the litter will be S.C and carry the gene, 25% will be S.C but not carry the gene and 25% will be LSH. The S.C  who do not carry the gene tend to have a little less coat. (like Ross) To produce LSH both parents must carry the gene. If you mate two LSH dogs then you will only get LSH puppies. Sammi was not tested and despite me thinking maybe she didn't carry the gene she obviously did! Apparently it is unusual in a litter of 9 to only have one LSH, but we only had one in the "B" litter too. (Saying that we did loose 3 of the 12 at birth so who knows?) 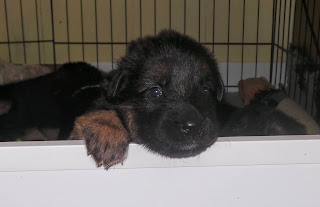 Biscuit/Bruce did cause some kerfuffle on Facebook. Some insisting he was a LSH, some insisting he was not. I must admit I had far more respect for the knowledgeable people who said well I think ...... but I may be proved wrong. I do have a witness that I always said he was different, even before the collars you could pick him out. Bruce may not have had the early classic LSH characteristics but by 3 weeks I guess the only doubts Steve and I had were planted by other people really. Now people continue to ask and bicker about it ... my reply, "Have you ever seen a S.C with fluffy ears? I have not!" The picture above is of Bruce with his rosette from the Long Coated Puppy Dog Class at the online welfare show. The second photo of Bruce at 3 weeks old really should have given everyone no doubts that he was a LSH, but at the time he really kept us guessing. 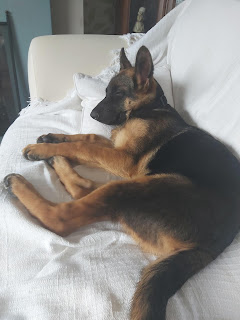 I really tried to sleep then my mind turned to Jazz and I smiled at the thought of Yvette warming up the towel to dry her ... Not something I've told many people till now ... in the Winter Kaiah loves being dried with a warm towel. Steve pops it on the fire guard whilst we are walking so it's warm for her .. pathetic aren't we really, but she does stand still if it's warm and fidgets if it's not! Orin is pretty good really, a bit wiggly and giggly about it all, but I don't care that it's a bit of fun as long as the job gets done!
As you can see Jazz looks wonderful, her new coat coming through and the tan a wonderful deep red. As you know the colour is my preference, and having paler bitches I also know the deep colour is much favoured in the showring. Orin is the same colour and a video of Isla on Facebook showed her to be of a similar colour too. To be honest I think they will all end up richly coloured! I think I may go on some Facebook pages and steal more photos later!
At 3 am I must have been asleep but I was woken up by Asha needing to go out. She has only been off the tablets for 36 hours and the diarrhea has returned ... A real worry and I will write more about her later.
Posted by Tali at 09:30 1 comment: