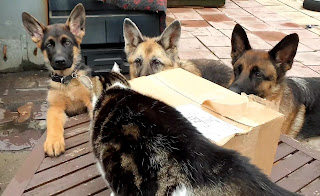 I always buy fish treats at the shows, sticking to the white fish jerky as the kids love it. With no shows my supplies were getting low. Anyway I found the site on line and ordered some. (luckily there was an offer on too) Looking through the site I decided to order some salmon and seaweed bites too, after all salmon and seaweed are good for coat and skin condition. Yesterday our rather expensive parcel arrive, 2 Kg of fish jerky and a kg of the bites. I had an audience as I opened the box and I thought they should all try a salmon bite. OMG the smell, now the jerky smells, I'm prepared for that but this was, well,  OMG ... this was just awful, so bad I felt sick! I kind of hope the smell was so concentrated as the product had been in a sealed bag, but I must admit I'm still struggling a little with it. Ah well of course they love it. 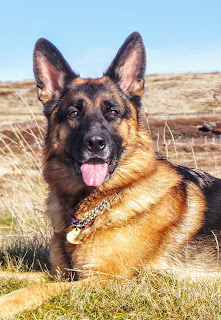 I've been concerned about Kaiah over the last few days. She's now 9 weeks from the beginning of her season so roughly 7 weeks from when she would have ovulated. She's eating normally, not drinking excessively, Ok out on a walk but very very "demandingly" cuddly and a little irritable with the other dogs. All quite normal after a season, but the concern is that the boys, particularly Ross are paying her too much attention. Ross is sniffing around her and mounting her, this behaviour at this time in her biological clock is often the first concerning sign of a pyometera. I've taken her temperature every day for the last 3 days (Not including today) and it's been normal. I talked to two knowledgeable friends and they advised that should the behaviour continue  that I should take Kaiah for a scan, an ultrasound scan can pick up the infection in the uterus. Now something rang a bell that this had happened before and I went searching my blog, and yes it had. I recorded the exact same behaviour from the males towards her in April 2019, I was concerned then too but due to her not having a temperature, not significantly going off her food or drinking excessively I just monitored the situation. Having the previous notes means that I do feel a litter better about the situation, but should she show any other of the classic signs the I will immediately take her to the vets. 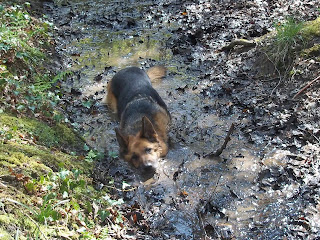 Pyometera is a condition that all bitch owners should be aware of. It is basically a life threatening infection in the uterus that occurs within weeks of a season. It mainly affects older entire bitches but has been known to occur in young bitches and spayed bitches. (Then called Stump pyometera) My main reason for spaying the bitches at around 6 years is to lessen the risk dramatically of any uterus infection. As Kiri was on steroids for her MMM from 4 years old she was not spayed, (steroids can interfere with the healing process) and sadly developed a Pyo at 10 years old. But our Kiri was a trooper and survived the surgery, living till she was approaching her 14th birthday and basically died of old age. Hope you like seeing a memory photo of Kiri doing what she loved best!
Posted by Tali at 13:24

That must have been a worry with Kaiah and thank goodness she's ok. Loved the pic of Kiri in the mud I still remember the first time I saw her do it she was so funny and so missed x