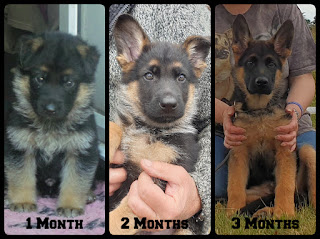 Well the "K" kids are 3 months old. Orin is doing really well, he's looking promising and I'm doing my best to take him out and about as much as I can. Sadly he's missing out on dog club and his visit to the vets did not go as well as I'd hoped. Such strange times, harder without doubt for bringing up puppies.
I'm in regular contact with all the puppy owners and I think everything is going quite well with all of them. Facebook really is a wonderful for keeping in contact and getting puppy updates.
So at the 3 month mark Orin is 43cms at the wither and now weighs 13.1kg, which is exactly where I hoped he'd be. Actually it's amazing as Kyle was 12.9kg at the same age so Orin really has caught up well. When Kyle was a week old he was 2lb 13oz, when he was 4 weeks old he was 5lb 4 oz ... Orin was 2lb at a week old and 4lb 12oz at 4 weeks. Up until their time of leaving Orin was the largest of the K litter and some of the others like Basil/Loki and Beth/Fly were really much smaller in the early days. (Basil/Loki was only 1lb 8oz at 1 week but my god did he catch up being only an oz or so behind Orin at 8 weeks)
It is fascinating, the "J" litter were numerically small but HUGE puppies, the "K" litter were numerically large and small puppies, but by the time they were/are 3 months old it's all balanced out nicely.
I know I've published this before but just for easy of finding it later, the weights and measures I have at 3 month for Ross is 12.6kg and 43cms at the wither -  Loki was heavier by then at 13.8kg, Orin is somewhere nicely in the middle. 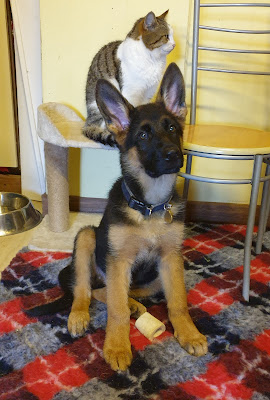