With Dog shows cancelled since March a lot of charities and stall holders are struggling. I've got fish that I usually buy at the shows from their online shop and I've supported a couple of virtual charity shows as well as a couple of fun club shows. Well in the first Orin was stone last and we both sulked! In the second all the dogs went "unplaced" in the breed classes but we had a couple of successes. 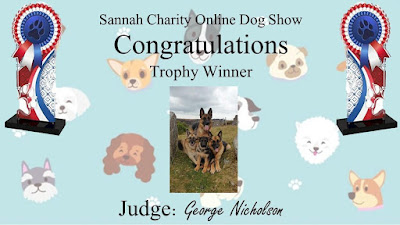 We won First for our "Four Generation" Photo 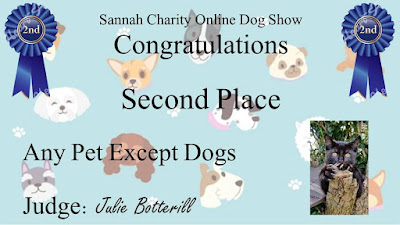 Don't tell Perry and Jamie as they also entered but Luther got a second.

Today was the German Shepherd Welfare Virtual show and as I got back from walking I got a message from Izzy to say that Bruce was third in his Long Coat male puppy class. Wow fantastic, well done Puppy Bruce - over 30 entries. 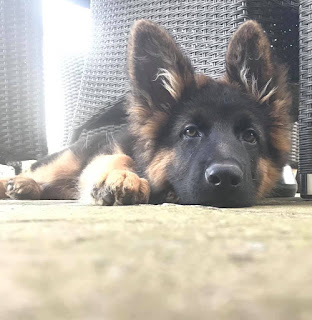 I was really excited and went on to see how my guys had got on. Nico was unplaced in Veteran dog but OMG Asha won Veteran bitch .. and to top it all and make it a double celebration her daughter Lexi owned by Linda was third. 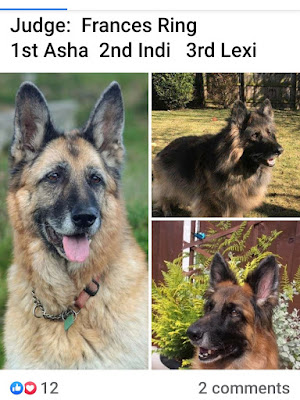 None of the adults were placed and I went to look up Orin's class - not yet judged but 38 entries. Ah well. I nodded off on the sofa, turning the ringer off on the phone as I do. When I woke up there were congratulation messages from friends and from the show organisers. Baby Orin not only won his class but also got BPIS - Judge Steve Foran -a well respected breed judge! 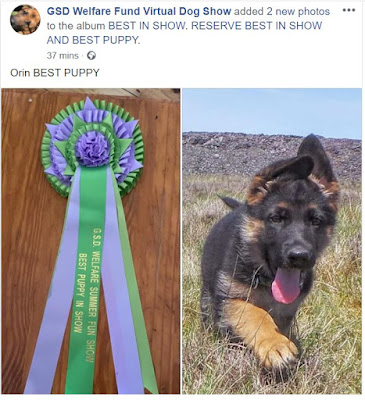 Hell I know it's a bit of fun and a dog can not be judged on a photo but it's still not wrong to be over the moon is it. His rosette will be posted to him this week, he won and didn't even have to raise a paw!
What it was all about - £1,882.74 for GSD Welfare
Posted by Tali at 16:08

See what ingenuity folk can come up with. You and Linda must be delighted as am I for GSD Rescue [know them from twitter] and so chuffed for Orin ~ his first show and aa BPIS what an achievement.xxxx

Just reread blog and know you will tell me I got it wrong:~} GSD Welfare, not Rescue. Sorry ~ anyway the funds will still go to beloved GSD's. Is Freshfields shop open do you know, as I have quite a lot of stuff ready for them again, and the cupboards are bulging!!!