I Should Have Been At The Echo ... 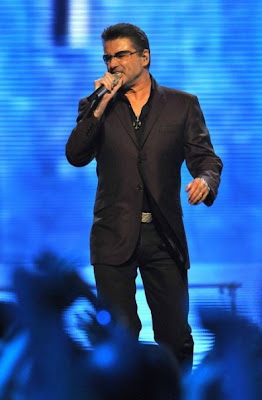 Yep today is the day I should have been seeing George at The Echo Theatre in Liverpool. Instead I woke-up with a heavy heart and my spirits were lowered further by the articles I should know better than to read! They made it sound as if George's condition has deteriorated saying that his family and friends had been "called to his bedside."I prayed for an official statement from his management, just something to put my/our minds at rest. And would you believe it, finally today it came; but this time not from his management this time the statement came straight from the top, straight from the hospital .......
30.11.2011
George Michael

Professors Gottfried Locker and Christoph Zielinski would like to make a statement regarding George Michael.
Further to our previous statement Mr. Michael is being treated here for pneumonia and nothing else.
The latest development in Mr. Michael's case - which has evolved from a severe pneumococcal infection - necessitated intensive care due to its severity and extension. We are happy to announce that Mr Michael is improving steadily with an impressive regression of pneumonic symptoms and follows a steady rate of improvement as hoped.
There are no other health issues with regards to the patient other than the underlying pneumonic disorder, and no further measures had to be taken.
Mr. Michael is receiving precisely the same treatment as any ordinary patient in Austria would receive at the hospital for this disease.
As we said previously, complete rest and peace and quiet are mandatory.
We wish to make it clear that we are putting this statement out and there will be no further comment.

Playtime With The New Samsung Galaxy S Plus! 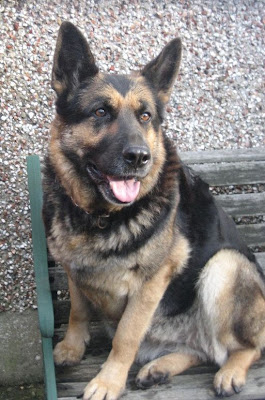 If you read my last blog last night or this morning you may have noticed it came to an abrupt ending, actually in the middle of a sentence. Strange how the last couple of paragraphs disappeared ... so I re-wrote it, posted it and bugger me it disappeared again. Now getting myself in a tiss I wrote it again, saved it in a different programme and then posted it ... Woo hoo it's all there, or was the last time I looked!  Maybe Witchcraft has been at work. "Jezi you got your spells book out again?" 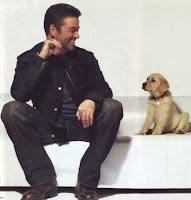 Just a bit of "Officialish" news re George. David posted on twitter ... "david__austin David Austin
Absolutely no one that I know has or ever would talk to the press. There has been only one statement. Most of what you read has been made up." Taking it of course that this is David as yet his account is not verified!
Posted by Tali at 12:21 1 comment:

Thinking About You My Lovely 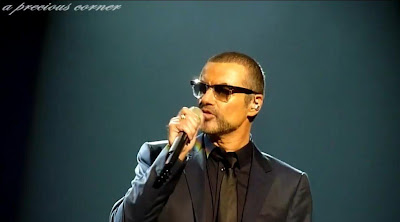 Statment on GM.Com
It’s with great sadness that GeorgeMichael.com must announce the postponement of the remaining dates on the Symphonica tour due to George’s on-going battle with pneumonia.
While George is receiving excellent medical care and is responding to treatment and slowly improving, to ensure his complete well-being, George’s doctors have advised that he cannot perform the rest of his Symphonica tour and that he instead takes a full and complete rest.
Prof. Dr. Christoph Zielinski, Chairman, Department of Medicine General Hospital - Medical University Vienna, Austria and Prof. Dr. Thomas Staudinger, Specialist in Internal Medicine and Intensive Care Medicine have stated the following:
"George Michael has severe community acquired pneumonia and is being treated as an inpatient. His condition has stabilized and he is responding to treatment. From the current point of view, the time until recovery cannot be estimated, but he will not be able to perform the rest of the tour. Besides medical treatment, complete rest and peace and quiet are mandatory."
As a result, all of the UK dates of the Symphonica European tour will be postponed. George was very much looking forward to bringing his tour back home and performing for his loyal and dedicated UK fan base.
Discussions and preparations are currently under way in order to arrange the rescheduled dates and further announcements will be made at the earliest opportunity. In the meantime, tickets holders are asked to retain their tickets
Posted by Tali at 20:05 2 comments:

Get Well Soon My lovely 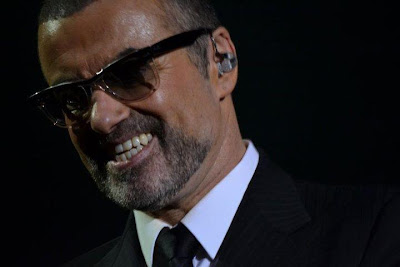 Get well soon Mr Handsome .... Put "You" first, we can wait!
George Michael has been forced to cancel a string of concert dates after being diagnosed with pneumonia.

The singer, 48, was hospitalised in Vienna, Austria, where he was due to perform on Monday.
As a result of his continuing medical treatment, his scheduled gig in Strasbourg, France, tonight and concerts in Cardiff this week have all been postponed.
Posted by Tali at 19:31 3 comments: 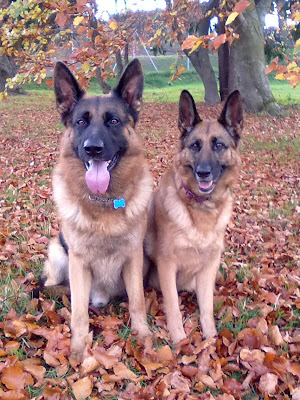 Just a quick photo of Mikey and his Mum at Rhyl show today.
Dead chuffed Mikey got BOB...
... shame there was only Tali there for competition!
Posted by Tali at 19:40 1 comment: 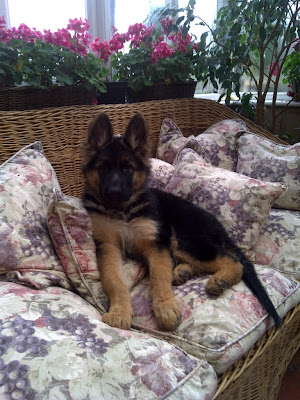 ... didn't take part in the wall excavation programme then? 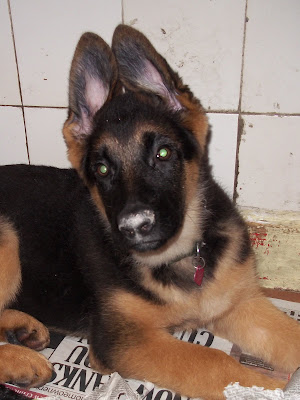 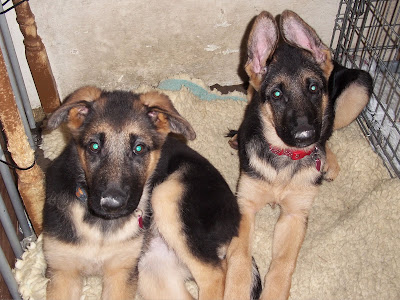 Jezi and Enya were assisting
And Danni? 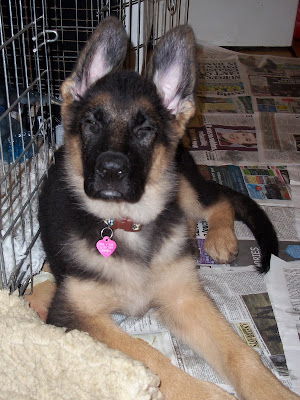 Just for A Change

A couple of photos of the adults enjoying the Autumn sunshine earlier in the week. 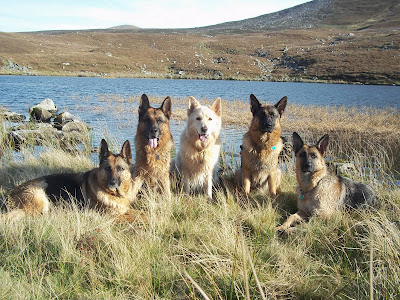 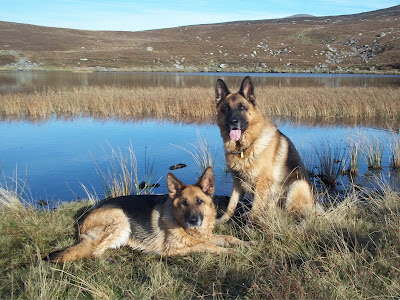 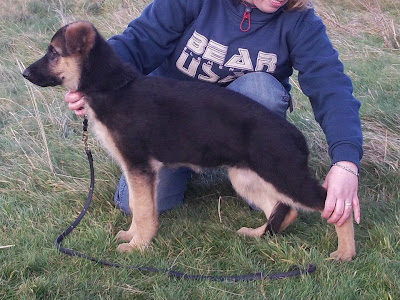 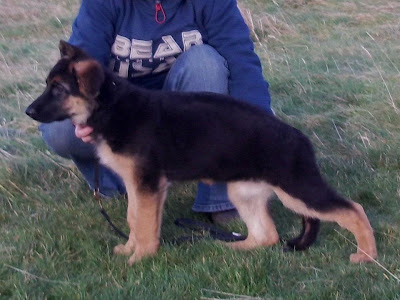 Quick shot taken with the phone this morning ... before all hell broke out and Danni and Jezi had a "proper" spat!
Makes me realise that my thoughts on litter sisters have always been right... keeping two is going to be hard work, keeping 4 is impossible and I now have the war wounds to prove it!
Posted by Tali at 11:42 4 comments:


Wating and hoping for photos of the other today too? Please pretty please?.....
Update
Just got this already ....Thanks Sue
When Lexi Met Harley
Posted by Tali at 18:41 3 comments: 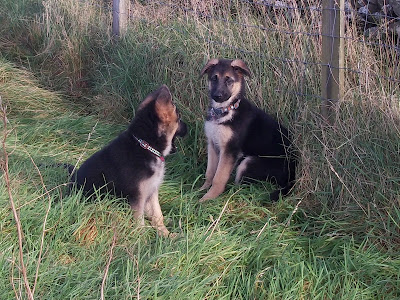 Danni and Jezi ... Hey Jezi your ears look silly like that! 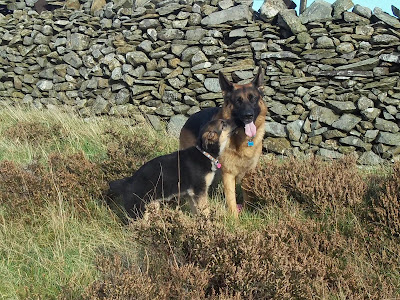 Jezi and Mikey .... Uncle Mikey, Danni laughed at my ears 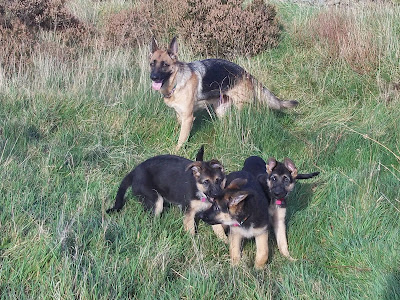 That Put The Smile Back On My Face 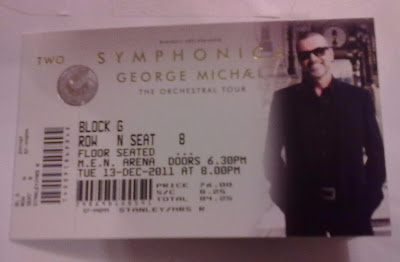 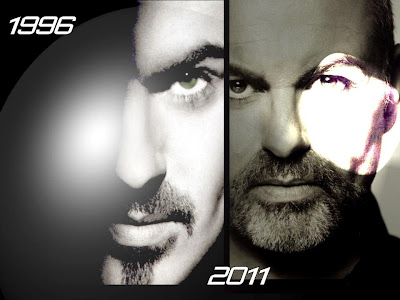 Yesterday we had a nice lady on the phone asking about Danni. She had followed her with interest on forums and finally couldn't resist her charm. She was very excited when I said Danni was still available for sale and said she would love to have her. All well and good, but to be honest my heart sank, at 12 weeks they have become part of our "Family!" Sensibly Danni and Enya need homes, someone else can give them more and that's what I want for them, they deserve "it all!"
This lady has a 9 month old male GSD, a Tirgram Tim son. I told her that therefore she would need to make sure they never mated as Tim and Robbi (Danni's dad) are half brothers. Initially she said no problem, but later rang to tell me that having discussed it with her husband they decided they could not out rule breeding .... so by mutual agreement we decided Danni would not be going!
So are Danni and Enya still for sale? Yes of course they are, keeping 4 would just be ludicrous, but until the home/time is right then the little one's, like Ziva and Jezi will get all we can give them....even if it kills us in the process...lol!
Posted by Tali at 19:27 4 comments:

We Can Be Good! 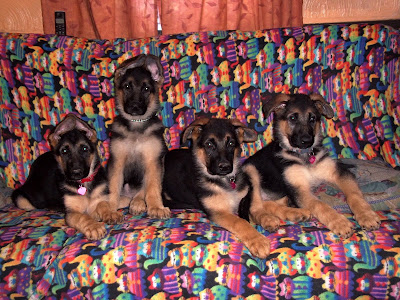 But only cause they've been on the go all morning  and are sleepy now!!!
Little Jezi has given us a scare this last week. The pups are now 12 weeks and Jezi was screaming in pain with her front left leg last Thursday. I was at work, Steve panic and took her to the vet, they found nothing wrong with her and she soon came round. Yesterday when I was out walking Steve phoned me, again saying that Jezi was screaming in pain with her leg. I got home to see her on the sofa feeling very sorry for herself. We put her on the floor and realised she's limping on the front right. We've examined her toes and joints, no reaction, but when I squeezed the back of the long bone she screamed.So now I'm think could it be Panostitis, though she is a little young for it.
I've only had one experince of the condition in the past. Lia had it in 1997 .... I remember feeling so sad for her they are in so much pain with it.  and now poor Jezi is crying on the sofa!
"Panosteitis, or Pano as it is commonly called, is a disease which affects the long bones in growing young dogs, mostly of the larger breeds, but occasionally is seen in some smaller breeds as well. German Shepherds are one of the breeds who are often presented with lameness and limb pain between 5 and 18 months of age, and many veterinarians diagnose Pano as it's cause.
The first signs of Pano are often a slight lameness in one leg, progressing to a severe limp and possibly non-use of the affected leg. It may last for days to weeks, and may seem to resolve then recur in the same leg, or another one. Some dogs can exhibit lameness in more than one, or even all legs at the same time. Often Pano shows up in a foreleg first. Bouts of lameness can come and go, seemingly for months. Some dogs suffer from Pano off and on until they are nearing 2 years of age or even beyond.. Most cases start near the end of rapid growth, about 5 to 6 months of age, and are cleared up by 12 to 18 months of age. Males seem to be more affected than females, but both sexes can exhibit signs.
Radiographic signs, those seen on an x-ray, can be elusive when diagnosing Pano. The bones most affected are the radius and ulna (the foreleg), the humerus (upper arm), the femur (thigh) and the tibia (lower rear leg). Pano is an inflammation of the bone itself, the cortex (outer shell) becomes less distinct and foggy, and the interior of the bone seems to increase in density. Pano lesions are not always seen on an X-ray even though the dog may be showing clinical signs of lameness and pain."
Posted by Tali at 12:14 5 comments:

Getting Away From Them

﻿﻿
﻿﻿I love the Winter Sunshine.
Linda and I took the kids out today for a nice walk to get away from the "juniors."
I guess they really need a break from them sometimes
Posted by Tali at 16:37 3 comments:

Thanks Sue and Alex for sending me these wonderful photos of Diesel from the "H" litter....
He looks lovely and I'm so glad I get to see him so often! :) 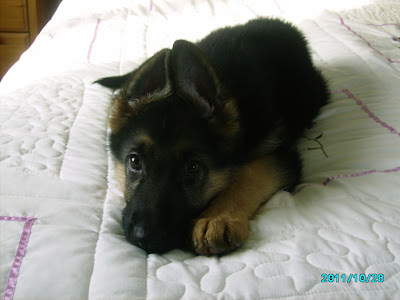 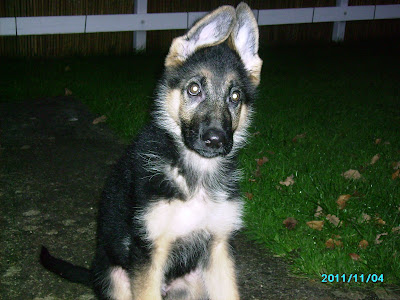 The big fellow we all know as Kai, Asha and Mikey's brother from the "G" litter.
Son to our Kai and Tali and therefore an Uncle to little Diesel.
Thanks Again John for the photos 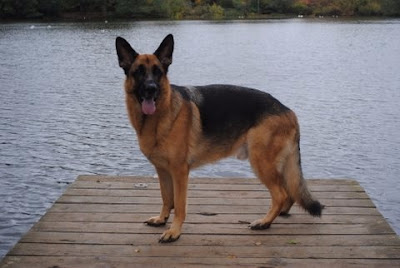 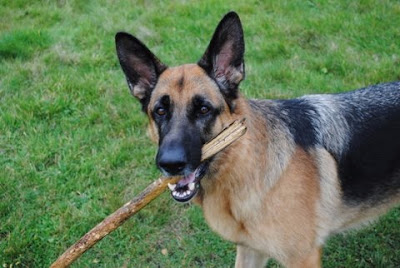 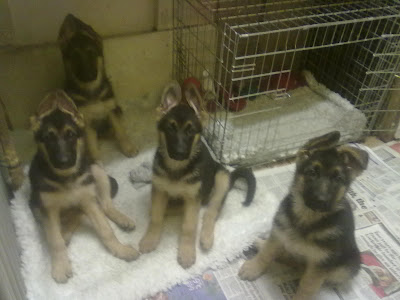 ....At 12 weeks old.
The longer they stay the harder it will be when/if the time comes to say goodbye.
Jezi at the back, Enya, Ziva and Danni
Posted by Tali at 18:06 1 comment: