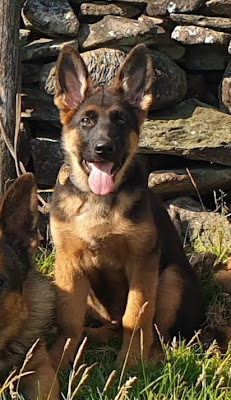 I now have less than 12kg of the Doctor John's puppy food left. I usually leave puppies on puppy food till they are about 5 months, but Dr. John recommend a change to Titanium at about 4 months, well that suits me fine. Leaving them on puppy food for too long can add to the risk of them growing too quickly and developing panosteitis. Titanium is 2% less protein than the puppy food and I'm really pleased at how my adults are doing on it so I'll definitely give the recommended change a go.
Over the years I've tried many different puppy foods, Royal Canine, Beta, Pedigree, Arden Grange and CSJ all come to mind .. some have been far more successful than others. Some I would use again, some I would not. In previous years if you have told me to feed my pups or dogs on any Doctor John's product then I would have told you no way, I would never feed my dogs on such rubbish. Times change and Doctor John's food sure have improved and come up the ranks. They still make the Silver and Gold Medal which I presume have also improved, but you know I really can not complain about the puppy food and the adults have been on Titanium now for months. I'm really pleased with their general condition. Sammi was fed on it during pregnancy and whelping and looked fantastic throughout. Ok she had 4 meals a day and one over night, but I did not have to help her with feeding the puppies at all. Of course we started weaning at 2 weeks, but we always do, just a little taste for them but her milk supply continued to flow beyond when it was needed. The only thing I'd like Gilpa to think about is the recommended allowance they suggested. "Feeding puppies to appetite up to 8 weeks" really isn't helpful, especially when you are using a product for the first time. Also I consider that the amount recommended for Orin now is far too generous, I don't think even he could eat that much! I know it is only a guide, but still it's way out for what I'm feeding him ....
I think we are all quick to criticise but I'd really like to thank the GSD folk who told me to give this food a go. I think I'd just like to say well done Gilpa on bringing Doctor John's food to such a high standard. I will continue to use Titanium and if luck is on our side I will definitely be using the puppy food again.
Not an official weigh in but my little man Orin is 15kg today, so putting on an average of 2kg a week. I'm not taking bets but under or over 20kg by the 19th of July?
Posted by Tali at 15:28