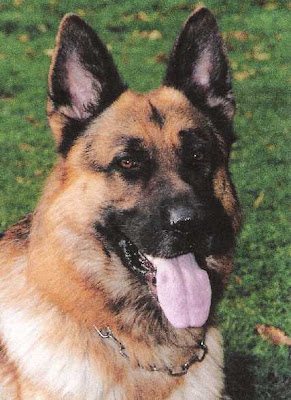 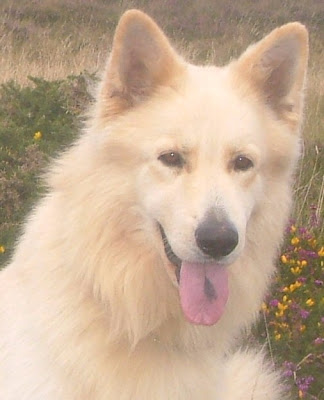 ......does Finlay stop on the door-step and have to be invited into the house?
.....and why when I walk briskly towards him does he cower?
Maybe best I don't know but I can imagine, and I guess I'll always wonder!
Posted by Tali at 20:11 1 comment: 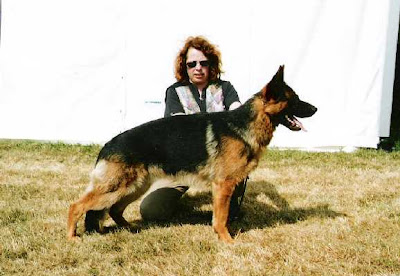 I wrote this article for our dog club's newsletter....thought I'd share it with you......
Now don’t kid yourself; yeah, this could be written about you! How quick are you to belittle me for my “other” passion in life? I’ve heard you, a quick remark… “Bloody poof”….or a sarcastic giggle. Do you know how much it upsets me? Do I ask for it? I hope not, but still you feel inclined to comment without tact, or thought that this passion may just be what’s keeping me afloat at the moment. “He” is my escapism, so back off!!!
Hang on, this is a dog club newsletter, where am I going with this? Well if you care to read on I’ll tell you. I sat in that hall one night listening to people who work their dogs in one “sport” laughing and belittling others for showing their dogs, and similarly on another night I heard someone else taking the “Michael” out of the Heel Work To Music enthusiasts. Dog “people” all together in one room with enthusiasm and passion for their dogs, but still they feel the need to criticise and comment. That’s what got me thinking, if we can all stick together and admire each other for our own dog sport then surely it’s a start, how ever little.
You see, what I think is important is that we are here together, a community with something special in common, the love of dogs. We choose to spend our lives with our canine companions. Be it ordinary days at home or special days at shows; events, camping holidays or even a lovely walk in the countryside, the list is endless. Quality time with our dogs, and often our dog friends.
My dog “friends” are the best that I’ve got. Like-minded people whom I love to share my life with. Those fantastic week-ends at dog shows, there to comfort each other when we loose and share in the joy of winning, but each one knowing that the best dog goes home in the car with us at the end of the day.
I don’t work in Obedience Competitions anymore and agility doesn’t do it for me, though I have tried it. Fly ball and Heelwork to music are really not for me but if it’s your “thing” then go for it and enjoy your hobby with your beloved companion. But please do not belittle me for choosing to spend my days showing my beautiful dogs in the company of my good friends.
If this small dog community can’t start to understand each other and support each other within our own interests then my god it makes me worry about the bigger picture. What chance is there of ever eradicating racism and homophobia?
We love are dogs so lets support each other, be happy for each other in what we choose to do. We all need escapism, be it “that pop star” a round of golf or a week-end of fly ball. Let’s be happy for each other and not so quick to judge, after all it’s horses for courses, or dog sports for dog people.So, was this partly written about you? Only you and I know that and I’m never ‘gonna’ tell!!!!!!!!
Posted by Tali at 21:09 No comments: 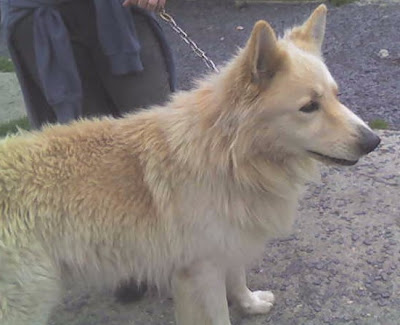 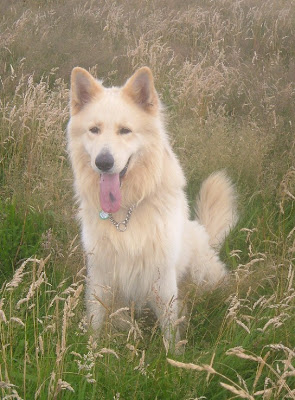 First Photo.........The day "He" arrived
Second photo.....Looking a little better
My Friend Finlay
It had been a very emotional few weeks in my life. I felt like my life was in tatters. To loose Dexi had been bad enough, to loose Seffe 3 weeks later had left me devastated. I cried so much I thought I'd never stop, but with 7 others to care for and love I found I could carry on, but only just! Feeling emotionally unbalanced I returned to work and caring for the animals there helped me to cope with my loss. Then on the Wednesday came a call from a council-run pound. The kennels’ owners may well have denied their statement later; but I was in the room when the call came in and I heard the list of 25 dogs due for destruction on the Friday read out, and later saw it all written down. Cross breeds, Sheepdogs, a Labrador bitch and a white German Shepherd to name but a few. After a quick word with "him indoors" we decided to offer a foster home to the GSD. How could I pick one knowing there was little hope of a future for the others? I even had to refuse the request to take two Labrador crosses as well as I simply don’t have the room. Still the morning was spent texting, phoning and e.mailing to assure a future for the other dogs. Through the hard work and dedication of a few individuals I'm glad to say that within 48 hours alternative accommodation was found for all the other dogs.
It was Friday morning when one of our charities volunteer arrived with the dogs coming to this area. As a GSD enthusiast I’ve had little time for whites, but I do like a black and tan long coat. I remember so clearly my thought when I first set eyes on him. "OMG, not just bloody white but a long coat as well.....and he's full of knots!!!"
It’s not snobbery you know! There are practical reasons why “white” is an unrecognised colour in the G.S.D breed standard. A German Shepherd herding his sheep on the hill needs to be easily distinguished from it’s flock, imagine the difficulties if the dog was almost the same colour as the sheep! Also a white dog working within the forces, (yes, I ’m aware there are a few) would stick out like a sore thumb during night duties. The gene pool for whites is so small that character has to be questioned; especially when the “white” enthusiasts are choosing to breed white to white and avoiding using standard coloured dogs to try and produce pure “snow” white dogs and eradicate cream animals.
As I’m a George Michael fan one of my work mates suggested I call him “Freeek.” (a George song) I really did think about it, but just couldn’t. Eventually I christened him Finlay.
Finlay is most things I consider incorrect in a GSD, he’s white,(well cream)he’s long coated, he’s got small, almost Samoyed like ears, and he’s unbelievably long....... Here’s my head my arse is coming!!! But he’s calm, self assured and totally non-confrontational, funny, bubbly and so easy to live with.
Now I know it's only 2 weeks since I met Finlay but he really is quite a stunning character. To be honest this young man has charmed me. Oops....looks like Rhian “read the breed standard” Stanley has fallen in love with a "white long coat." I keep telling him "you could have been a dead man now you know!" Still I defy any “dog lover” to say that this is not a good-looking dog. He may not be a good example of a GSD but he’s a very good-looking dog. So now that’s how I look at him as a lovely looking dog with a cracking character, I hope others will do the same.
Actually maybe I did the wrong thing for me in fostering Finn so shortly after the death of Seffe and Dexi. The wounds where too raw, I was not emotionally equipped to deal with fostering at that moment. I've let him in, I've fallen for the "white boy." I keep thinking of Seffe and singing the lyrics to "Please send me someone to love," and bursting into tears. Anyway, equipped or not, he's here now and had I not taken him.....well it really doesn't bear thinking about does it.
Today I've decided that I'm keeping Finlay. I really couldn't possibly give him up now. This wonderful dog is helping me heal, basically maybe he was just what I needed. He makes me smile and warms up my heart, his brown eyes and soft expression melt me, and he looks nothing like the wonderful family that I've lost so I will never make comparisons.
How could anyone have even been able to give him up? His owner knew where he was, they had been informed of his plight but they refused to pay the “fine” to get their dog back. Sometimes I really don't understand people, I would go through hell and high water to keep this wonderful dog safe.
I will never breed a litter of whites, and since Finn has lost his “bits” this week an accident will never happen here. I feel strongly about breeding to try and improve on what I’ve got and that means I will always adhere to the breed standard. But still I’ve opened my heart to this wonderful dog as an individual. He is now my friend.You know I find it so strange because in the past some “fosters” have been here for 18 months and I still managed to re-home them. I have fostered GSD's and kittens many times before without any difficulty in letting go when the time is right, but Finlay, well ....He has found his forever home here with me. I guess I needed him when he needed me.
Posted by Tali at 21:15 3 comments: 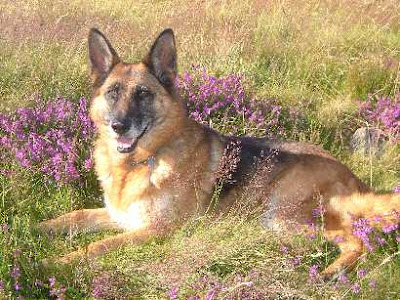