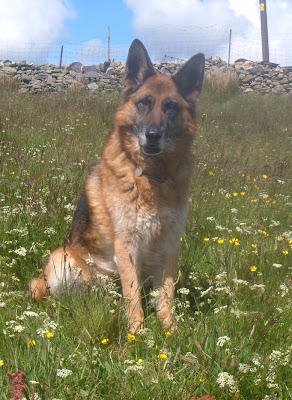 Born to my first litter, I have to be honest; Seffe was not the puppy I’d set my heart on. Aria her litter sister had always filled my eyes with expectations, I’d even called Aria by the name Seffe for a few days. But that was not to be, now that pain is buried well in the past where it should be, and I shared eleven and a half years of love and pleasure with MY darling Seffe.
Today I feel cheated of those last precious moments in her life. I feel that I never got to say that last goodbye. But how was I to know that when I popped into the village she would be gone when I came home? Thirty minutes, that’s all it took, and in that time she was stolen from me. Seffe was 11 and half years old, and hadn’t even been ill, she seemed so healthy. I was prepared for Dexi’s death, he'd been ill on and off for the last 3 months, but Seffe was so well, so happy......... Even yesterday, when I called her in to the bedroom before we went out she was barking at the neighbours.
Now I can only think of last Saturday (7.7.07) and how on top form she was at a dog show. Going round scrounging for a tit-bit and flirting with a 2 yr old German Shepherd male, and then winning the non-sporting class with boundless energy. Now my darling Seffe has gone and my heart is breaking. You see Dexi was the "star" here, the big winner, but she was my mate, my best friend, the one I could always trust to be by my side.
She was always funny; and along with her selective deafness she’d got funnier as she’d got older. I guess she must have felt that things “didn’t always apply” to her. She didn’t feel she had to go out with everyone else. She’d just stare at me so defiantly, and of course nine times out of ten, I’d just say, “If you don’t want to go that’s fine.” Making the excuse to myself of, “well she’s old now isn’t she,” for about the last 2 yrs I suppose.
Sometimes she treated Steve with contempt, other times with tolerance only. But I can only believe that they understood each other as he always said, “She’s not a bit of trouble when you’re not around.” But she was here first and my god did she remind him of that on a regular basis. If he cuddled her, she’d move away, if he tried to get her out of the bedroom in the morning she’d climb onto our bed and cuddle into me or simply stare at him defiantly. She also refused to go for walks with him, turning back half way across the field to come back to me. Strange little dog would give up her walk if I couldn’t go, now there’s love for you.
Seffe wasn’t really the best mum in the world; though she loved her litter of 5 pups for a few weeks she quickly got bored and allowed her own mum Nikki to take over rearing the hooligans. Good thing really as without Nikki I think the over intelligent Krizzie, Seffe’s daughter, would have got completely out of hand. After her litter Seffe was spayed, problem was nobody told her. Seffe continued to be a right flirt and I remember so well her falling in love (or lust) with a Hungarian Viszla at Ruthin show. She stood by the ring as the dog was being shown almost whimpering and bouncing around with excitement. It took me a while to figure out what she was getting so wound up about. The guy bought the dog over to meet her and she was ecstatic, I never saw her react to another dog that way before or after that day.
The last couple of years Seffe had a great time in her veteran classes. Though she got bored standing still she loved to move around the ring and as some will no doubt know what she loved even more was the applause. It was ALWAYS for her, it just made her jump with joy. So proud I’d felt only last week as the judge commented on her fitness and condition. Lets face it, it really is rare to see an eleven year old GSD in the ring, let alone one who still moved with enthusiasm and drive. Seffe was not a big show winner or a well known brood bitch. Seffe was my special friend, my comfort blanket, my charming, funny little friend, my shadow. It will take a long time for these wounds to heal, but one thing is for sure the world has been a better place and my life has been richer for having known Seffe. I only wish I’d had the pleasure of living with her a little bit longer. Good night Seffe. You have been loved.
Posted by Tali at 18:47 3 comments: 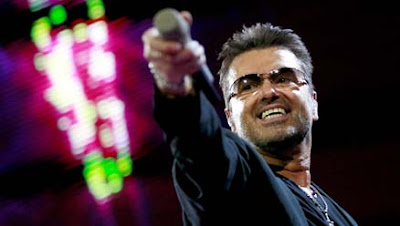 I must also mention my lovely friends on GMFORUMS. I feel such a bond with you, an understanding that needs no explaining….truly my dearest friends….from the bottom of my heart, I also thank you. http://www.georgemichaelforums.com/
Posted by Tali at 20:18 3 comments: 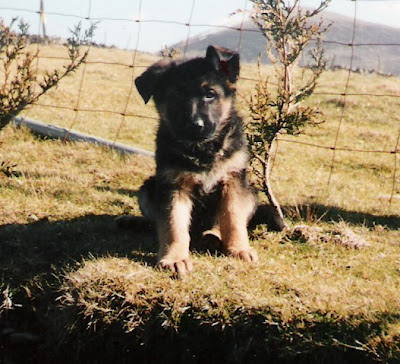 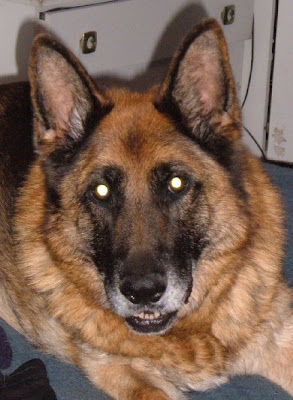 We have just lost our lovely Blanik Alliance, or Dexi as he was known to all who loved him.
From the first litter I had bred,He was a very special boy, his show ring achievements alone where a credit to him. He gained 1 CC, 3 RCC and was graded V at all his adult breed/ championship shows. Dexi was joint 3rd top sire in 1999 and 10th top winning GSD male in 2000. He was also Breed survey class 1 and sire of top winning puppy Nordau Krystal.
All that said and done it really is only the icing on the cake isn't it. First and foremost Dexi was our pet, he was a large, funny, clumsy, affectionate dog. He slept in the bedroom and over the last few years was more likely to be found snoring on the sofa than exercising in the fields.(though to be honest he always was a couch potato) But even as recent as last Thursday Dexi had a run around the bottom field when my friend had called up with her dog Lia. (Some of you will remember B. Billi-Lee)That day he was bubbly, cocky and full of himself. Really it was 9pm last night before the alarm bells started ringing again. He had been sick and was breathing strangely. Long story short.... By 11pm we where at the vets and having to make that dread-full decision. Great for him but Steve and I are gutted.
The small puppy didn't really stand out in the litter. I guess, being the greedy one, till he was 6wks he was just a little fat blob. But I remember when I then saw something in him and that "something" then stayed forever. We had several enquires for Dexi, when he was around 2 yrs we where offered £4,000 for him. No I'm not boasting, We would NEVER have sold OUR dog but we where gutted to be told by a top breeder that if he'd been owned by a top kennel like his own, he would have been a champion before he was 3 yrs old. Sadly this is possibly true!
The heavens opened this morning, the rain has never stopped. But dear Steve still had to dig a hole in the front garden, and Dexi now lies with his mother and his uncle Blade.
Nos Da "Blanik Alliance." and Thank you for every thing you gave us. You Have been Loved
Posted by Tali at 17:40 No comments: