Great what a bit of Photoshopping can do eh! 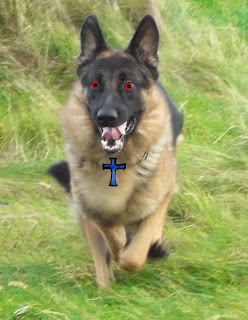 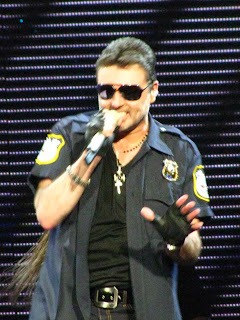 “I used to think of George Michael as being mechanical, like a scientist in a white coat, working in a laboratory, creating perfect harmonies, and all the while I was secretly admiring him.
“We did a song together once, and had the opportunity to do some bits again, but I couldn’t be bothered. And George went and spent hours re-recording, and of course it sounded amazing."
Posted by Tali at 13:40 1 comment: 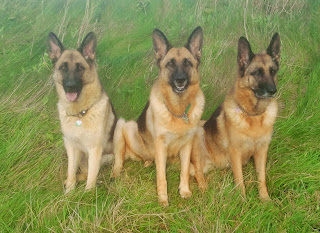 Didn't want to miss poor Jezi out of the 3 generation pics, though this is not a great photo, it's the best I got! Will try and get all 4 together soon.
Posted by Tali at 15:51 1 comment: 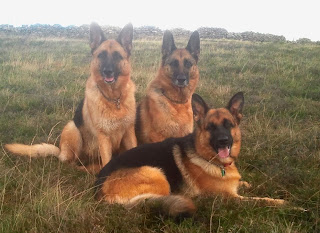 Well of females anyway!!! Shame Jezi wasn't with us, but she'd been out with her best "mate!"
I think if we have a nice day next week, and David Bailey is up for it, I'll try and get one of the four bitches together.
Posted by Tali at 18:07 1 comment:

Really shouldn't keep looking back, it just makes me cry, but sometimes I can't help myself and the last few days I've thought so much about those precious ones that I've loved and lost. So much joy in life but so much pain in their passing.
Now if all goes to plan I have so much to look forward too, to wish for ... come on girl pull your finger out, look ahead ....  onward and upwards ...... 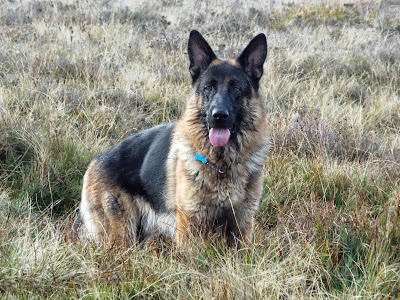 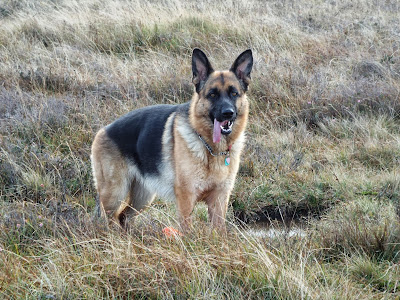 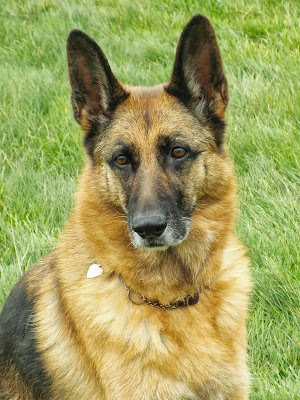 Tali
"Strange Baby,
Don't You Think I'm Looking Older?
but something good has happened to me
change, is a stranger
who never seems to show."
Posted by Tali at 14:01 1 comment:

Beautiful Day For a Walk 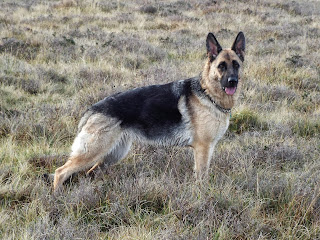 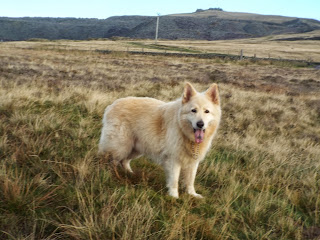 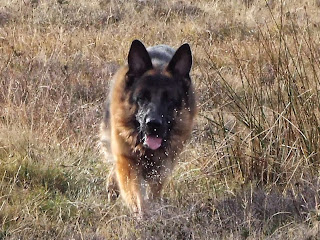 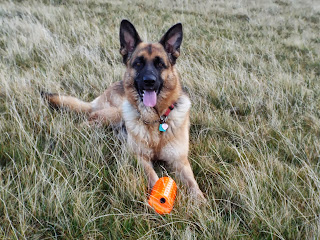 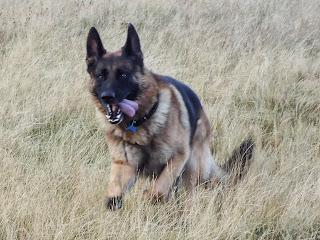 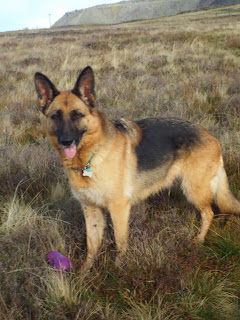 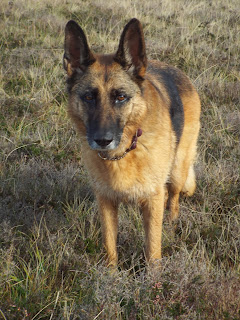 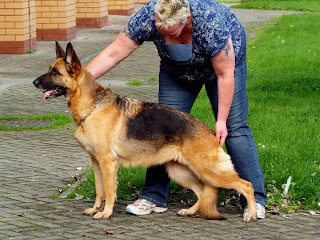 Again a Stunning photo of a new streamline Asha and a super picture of  Nico
Over the Moon with them. 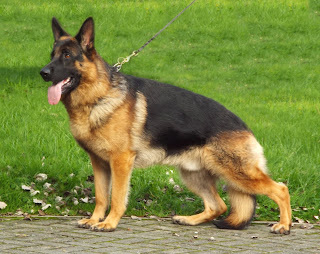 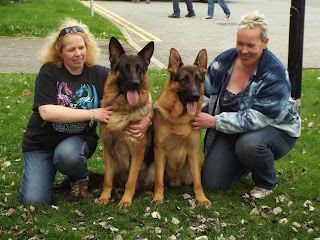 Love this photo of myself and my friend Angela with our boys, Nico and Bolt. So great to see the boys still getting on so well. I've known Angela since the early 90ies when we first met and hit it off in the GSD ring. The dog show world really does bring people together, I've got friends from all over the country; people who I can trust, people I can always turn too. I firmly believe that the more friends we have the richer we are, so yes, believe me I'm truly blessed!


Chuffed to bits with these 2 photo taken at Pwllheli show by Professional Photographer Bethan Hughes. More photos of the show are currently available for viewing on her site ... http://bodrhonyn.com/#/shows-album/4534692553

Walk One and Two

Today walk number one was sabotaged by people walking; (yes "people" on "my" mountain.. what is the world coming too?) the bloody cows that put the fear of god in me and kamikaze sheep. (don't ask.)  The Blanik 3 were just great, even when it looked like we would get run over by sheep their behaviour was impeccable. Walk number two was ace, not a person or cow in sight and even the sheep thankfully went in the opposite direction. Ziva did try out her new toy, yes it floats, but I'm sure gundog people would cringing if they saw how she carries it!! Three of the Blanik 4 were faultless .... and Tali? Well, some things never change!!!
We are all so lucky to live up here, it's just perfect for us and the animal.  (Well almost....Bloody cows!) Even on a dull blustery day it still takes my breath away. Sometimes on a walk I just have to stop and look around me, today was one of those days and I decided to just film a short video on my phone. Like I said yesterday, thank god for smart phones! By the way as soon as you get a camera or phone out Ziva poses! What a girl! 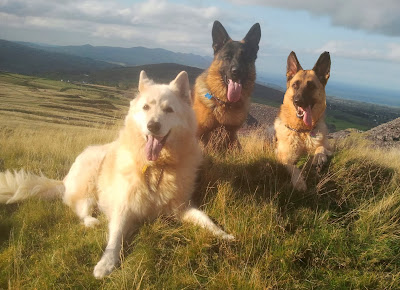 We are on top of the world! 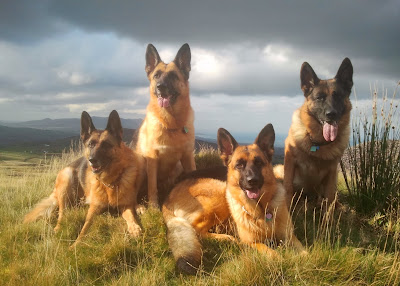 Kicking myself I didn't take the camera,
Thank God for Smart phones! 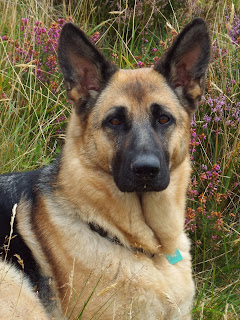 Jezi's had morning sickness, she's gone off her food and now she's made her bed ready for their arrival .... so who's got the heart to tell her she's not pregnant then?
Posted by Tali at 20:25 1 comment: "Haemophilia A" use to be a problem in the breed and all stud dog use to be tested. Over the past few years there have no positive tests for haemophiliacs. So I guess we all became slightly complacent by not testing our males and using stud dogs that were not tested. Sadly this year 2 males have tested positive for the disease, again making us realise the importance of testing our stud dogs. (Luckily these males were not used for breeding) As I intend allowing Nico to be used at stud I had him tested last week and the results were through in a matter of days. So to add to his list of health tests Nico is now "Haemophilia A - Normal."
What we need to know
"Like in humans it is only the male that is affected by the disease. In theory a female could be affected if an affected male was mated to a carrier female, but this would be an extremely rare occurrence.
Blood tests can be done to detect haemophilia, meaning that males can then be certified clear of the disease.
However, due to the mode of inheritance of the disease, only the males can be declared clear. It is inherited as a sex-linked recessive gene.
A male affected with haemophilia will produce sons who are clear of the disease and daughters who will not be affected, but will all be carriers.
These daughters will then produce males affected by the disease. It is not possible, however to test for carrier status, therefore females are not tested. It is therefore important that all males are tested clear before being used for breeding, so that they cannot pass the gene to their daughters.
A male cannot carry the disease, he is either affected or clear."
Posted by Tali at 15:53 No comments:

Saturday - My beautiful girls Asha and Ziva keeping up a 20 year family tradition of Blaniks not winning at Pwllheli show, still we had a great day, lots of fun with great friends and beautiful dogs. Thanks to Bethan for these photos. They are more precious than usual as they are the only ones I have, my memory card crashed when I connected it to the laptop. I could try and save the photos myself but they are too important so it's been sent off to the "professionals" to hopefully safely retrieve all the data. 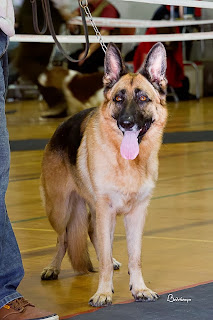 Asha
and Ziva in their classes yesterday. 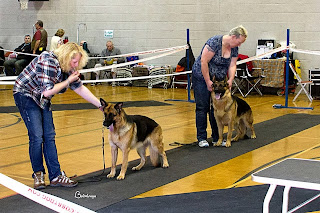 *****
Sunday - Mikey and I completed a sponsored walk in aid of Freshfields Animal Rescue. The powers that be tell me the sanctuary costs about £7,000 a week to run so every penny counts. Thanks to the people who have sponsored us :) 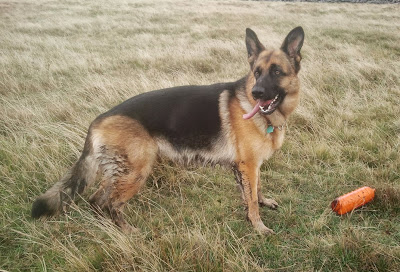 I Feel So Guilty

Cutting Asha's nails is something of an ordeal. Steve and I have tried for years to "Fight" with her but it end up with 2 stressed humans and a stressed and usually bleeding dog! Having inherited the family tradition of slightly flat feet her nails just don't seem to wear down, they grow outwards and dangerously long so require clipping 3 or 4 times a year. Though they don't all like it, I've never had trouble cutting anyone else's nails here, I do all the others by myself. Asha gets in such a state of panic about it that it had got too much for both of us. We'd tried pinning her down, even almost sitting on her and we'd tried giving her ACP ... a mild sedation from the vets. Nothing works, and her fighting means that when I do get chance to cut one I usually make it bleed and hurt her even more. Thus of course making the situation worse!  In credit to her through all the fights she has NEVER shows aggression, well to be honest no more than I expect from Asha ... I'm sure she doesn't know the meaning of the word! So what are we to do? Her nails have to be cut, but we can't physically do it. (Even with three of us!) 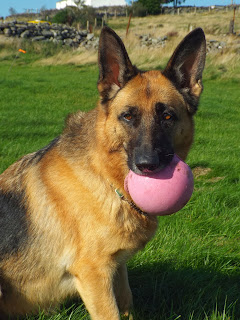 The solution seemed simple, a quick injection in her bottom at the vets, wait till she's asleep, cut her nails and another injection to bring her round. Not ideal but affective and a lot less stressful for all, well until yesterday anyway! Yesterday we saw a different vet, all seemed to have gone well till we got home. Asha was still very drowsy so to give her some peace from prying eyes and nosey noses I put her in the crate for a couple of hours. I fed her ..of course she ate, then brought her back into the living room. But it wasn't just a case of not being able to keep her eyes open, try as she did poor Asha was not even able to keep her head up. I tried to comfort her on the sofa and placed her head down to see if she would simply sleep it off .. but she just kept trying to fight it. From her sleep she woke up quickly and almost fell onto the floor. My poor girl had wet herself in her sleep. The throw and the sofa were soaked but my priority was to get her out of the room before she realised what had happened and got stressed out about it. Steve suggested I take her out to the field to see if the fresh air would help her. Leaving him to clean up that's what I did. There was just enough moonlight for me to see the others running around, but Asha plodded behind me. (pink ball in mouth of course!!) I must admit it seems to have been the best thing to do as she did improve after her "walk."
This morning Asha's fine, back to her normal sweet happy self; and she may well have been oblivious to all of last nights events. Maybe she feels like Linda the morning after more than one bottle of Lambrini! (though I do hope Linda doesn't pee on the sofa!) But joking aside I feel so guilty, I feel awful. I'm not sure I can face going through that again just for a nail cut! But what are my options? If we do go down that road again, for starters I would be asking for the vet that I'm familiar with; maybe he knows to a tee how much she needs. I can only surmise that she was given a much stronger dose than she needed yesterday. But maybe in future we'll just choose to fight with her ... or I may get a Dremel to try!