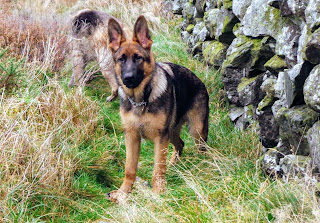 I was chatting to a friend last night who has pups who are just a few days older than Ross. They have far better coats than him, as I've always said taking a pup from a line that doesn't carry the L/C gene was a risk, but considering everything it was a risk worth taking. He has his bits and pieces, he has both ears up, he's cocky and confident and as far as I can tell he has correct dentition. (He's not the best at letting me see) At the moment conformation wise he looks pretty together, though his front movement is not and has never been his fortune.
Anyway my friend has measured her pups last week. The boy was 59cms one of the girls was just under 58cms and the other bitch was 59cms. The last time I measured Ross he was 56.5cms and I said I was doing it again till he was 6 months on the 30th... but of course last night I couldn't help myself ... well he was 58.5cms so doing quite well and I guess about where he should be at this age. I'd like him to be about 60 - 61 at 6 months, but not much taller really! Loki does mostly get away with being over size, though the breed specialist do notice and penalize it. 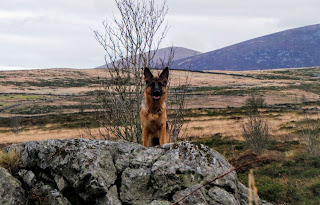 Getting back to coat, Ross isn't doing too bad, though he obviously has less coat than my homebred
lot. I guess it will still thicken more with maturity and he has enough to get away with it. I guess the blaster on a show day will benefit him like it does Loki. Loki doesn't carry a big coat either, but no one ever notices as he's "blasted" on ever show day. (Which he loves .. and I have Sammi and Kaiah pushing in for a go too)
We are now getting close to Ross' first show. I've entered him at a show with no breed classes, just for the experience of going in the ring before LKA really, that has 64 entries and no MPD class. Tough call for a puppy who will be just 6 months old. 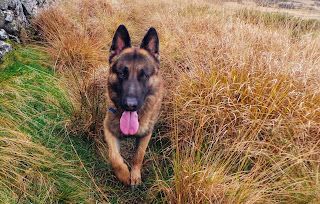 Kaiah will now be taking a forced break from the ring, she won't be happy. She qualified and was entered at Welsh Pup Of The Year on Saturday but I've had to withdraw her as she looks a mess. She's lost her beautiful glamorous coat, she's skinny and looks tatty. I'm disappointed that I can't show her, but she's not going in the ring looking like this. In my opinion she's too nice to loose because of her teenage moult  and I would be doing her an injustice if I put her in. Still I'm very proud that she qualified, our first puppy to do so!
Loki has also qualified for Welsh Dog Of The Year, another great achievement here. I'm not sure it existed in the show days of Louis, Dexi and Nikki. If it did I was unaware of it! The power of the internet eh!
Posted by Tali at 10:21

i think ross coat will come in time it is getting there now .gutted kaiah isnt going tmoro after doing so well to qualify for it