Vet And Walk with Loki

For the fourth day out of five I drove the 30 mins to the vets, this time to pick up more antibiotics for Asha. She did have to get up once in the night, thankfully Steve heard her, I didn't! She ate her breakfast in one go this morning, here's hoping it's a positive sign. 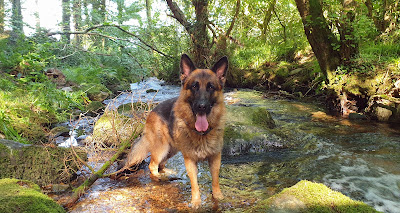 To make life easier for Steve I'd taken Loki with me, as I did earlier in the week. He can then be relaxed and get on with whatever he needs to do without worry. I decided to do a one on one walk with Loki, I hoped it could be a stepping stone in building our frayed friendship but to be honest I think he missed the company of the other dogs. Loki is no trouble at all outside, all his issues revolve around home. As I've said before he's not comfortable in his own skin and not mentally strong enough to be the top male in the pack. Neutering him would only make matters worse, removing his testosterone would give him even less self confidence.  I tried to get a selfie of the two of us together, sadly nothing worked but at least this screenshot made me smile.

Sadly on arriving home Loki was more moody then ever. Little Orin was so enthusiastic to greet him and welcome him back which made him tense and escalated the growling. Maybe it was the wrong thing to take him away then, maybe I should have taken Orin and Ross? Who knows ... but as I said at least it gave Steve some peace..
Posted by Tali at 11:41

Tali - you have such beautiful Shepherds and I can't stop looking at all the pictures. I'm desperately searching for someone in the GSD world and you're the only person I've found who might be able to help. I can't see your email on here, but I've sent you a friend request on FB so I can message you (in case you wonder who this random woman is). Thank you so much x

Glad Asha had breakfast always a good sign with her . Such a shame Loki had his grumpy head on when you got back with him x