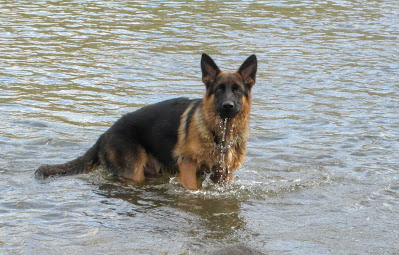 I've just had the most stressful evening and night. Poor Orin had a bad reaction to something which he must have come into contact with at Cwm Dulyn. Within no time after coming home from the walk he was quite itchy, now he's never been an itchy puppy, to be honest I've never seen him have as much as a spot, so I obviously knew quite quickly that something was wrong. We looked over him and found a swelling on his belly, quite near his willy, it looked like a sting or a severe nettle rash. I washed it with hib scrub and he settled for a while. But sadly quite soon it just got worse. The rash spread across the naked pats of his belly and he was bighting and scratching at every bit of himself. His left eye started to swell and his muzzle on the right side started to swell. Steve and I talked it through and I gave him 2 of Asha's steroids. For a while the swelling continued with the other eye swelling and most of his muzzle, bless him he looked pretty awful.
Orin ate his supper and I put him to bed, but he was winging and crying so much I just couldn't leave him. I got up and sat up with him. He was so distressed and I didn't know what to do for him. He was unsettled, panting, pacing, digging up bedding, wanting to go out, wanting to come in. I have to say that by then the swelling was starting to go down, but he just seemed to be getting more and more distressed.
Of course the worst he got the worst I got. With Steve asleep I felt so alone and so helpless. My puppy was distressed and I couldn't help him. I looked to see who was online, no one that I could really get help from and it was far too late to call anyone.
As I thought about the walk  I remembered the Japanese Knot Weed plant, but I remember clearly that it was not toxic, I'd checked last year. OMG then terror - had it had been sprayed? If so what the hell had they used? At that time of night I got myself into such a state that I felt physically sick. I took Orin's temperature, it was OK, I offered him a biscuit, he ate it but still he could not settle and now my mind was playing the cruellest games with me. I don't know why I decided to put a wet towel on the floor, probably because when my skin is bad cold is all that helps me, but finally Orin started to settle. After about 20 mis I took the towel to his bed and I went to bed ... there was silence till Asha sounded the alarm at about 3.30am. Steve let her out and Orin winged a little again .. thankfully he settled again ... though to be honest with all the negative stress and my mind still thinking the worst I did not sleep!
This morning Orin is fine, all the swelling and spots have gone, and he's calm and relaxed. Surprise surprise I'm exhausted and I have a headache. I've only experienced something like this once before, with Asha when she was a pup. She crunched a caterpillar and had pretty much the same symptoms, I rang the vets and he told me then to give her some steroids. Honestly I swear I hope I never see it again!
Posted by Tali at 09:35

Yes, last year I read the poster and googled the plant. Actually I found the facebook post too