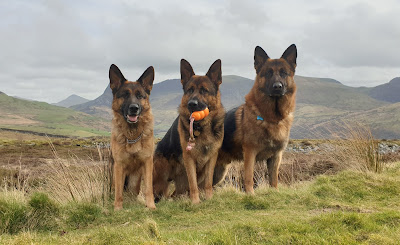 Yesterday I placed The Young Guns in position for a photo. The kong of course wedged in Ross' mouth. I threw Loki's toy behind me and took the shot. As I turned round I realised I'd thrown the toy into the gorse. No problem I have wellies and waterproofs .. once I find it I can get it.
Kaiah came for her treat and after I'd paid her her due I asked Loki "Where is your toy Loki?"  Off he goes through the narrow path through the gorse and left up the bank. He gets to the top of the bank and I ask him again, "Where is your toy Loki?"  He turns and looks at me and with his usual vacant expression and I can almost hear him say  "I dunno." Luckily for me young Ross had found it and has now turned into a Pointer. Was it up to the the left? Was it hell, it was on the right ... You can see from this photo that Ross had clocked where it landed and coupled with his determination and scenting abilities he found it in seconds. Of course he couldn't go and get it, even in that mouth there is no room for a kong and a gundog dummy!
I just can't get over the different in the two dogs and their keenness to work. Ross is showline breeding and so full of enthusiasm, he has natural working instincts and a determination needed to track and find things. Loki is two thirds showline bred and one third working line and to be honest he's piss useless when it comes to using his brain and his nose in conjunction with each other. I wonder if mixing showline and working lines has caused it or maybe it's just who he is?  I'm not being spiteful, it's just the observations of living with a family of dogs. Loki is very trainable and so wants to please me, he just seems to lack the natural abilities that I would expect to see. Ross on the other hand was harder to train as a youngster - but he's so good now. I don't know how he became so good to be honest there is no doubt he was a twat of a youngster.
And Kaiah? She has no interest in the toys on walk, but she'd stand on her head for a treat I'm sure.  She is typical of the females of the breed, bright, clever, a little devious and determined ..  and she easily runs rings around those "Stupid boys."
Posted by Tali at 13:10

As I'm reading this I'm smiling and can see the look on Loki's face and see Ross finding it while Loki is still looking for it !!!!bless him x

I have been thinking the same sometimes the difference between Tasha and Bella the both are clever in different ways Tasha for instance will drop her toy up on the mountain and she will forget about it for a while i will only tell her once where's your toy and she knows exactly were it is .Bella on the other hand will drop it and it's lost forever unless i will look for it LOL but she's clever in other things on our walks if i wanted a picture up on something high for instance a steep hill or a big rock she's up it before i can get my camera out of my pocket LOL