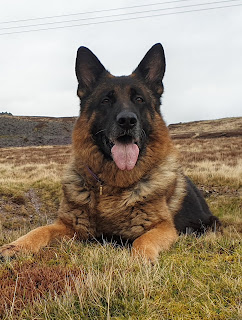 Yesterday I had a message asking if Nico was available at stud. I answered as I always do .. "Nico is available at stud to health tested, registered German Shepherd bitches who are sound in mind and body."  I went on to ask for the registered name so I could check the COF of any puppies that could be born from this mating. (The level of line breeding) The lady replied .. could she ring for a chat and advice .. well of course.
The lady sounded lovely and wanted advice on the health tests she needed to do before going ahead and mating the bitch who is currently just 2 years. She was giving herself time to get it right. I was quite impressed, but then came the deal breaker as far as I was concerned. The bitch is not registered. I explained that Nico was only available to registered bitches, but she said I saw her parents she is a pure bred GSD. She asked if she did a DNA test then would that be OK? I said no, that will only prove she is a GSD ... not who her parents are. For example and highly unlikely I know but how do we know the bitches mum wasn't Nico's sister, or at least a close relative? How will she know the bloodlines of any male she finds are compatible to her bitch? She has no paperwork, no pedigree, no idea of the background and and issues that could be there ... and she paid just shy of a thousand for her. Was she conned by the breeder? Well I guess not as the breeder told her the litter was not registered... at the time I guess she just didn't understand the implications. Will she find her a stud dog? Of course she will, someone will see a stud fee and won't care ...  but it won't be my stud dog , my dog my rules my principals.
Posted by Tali at 09:32