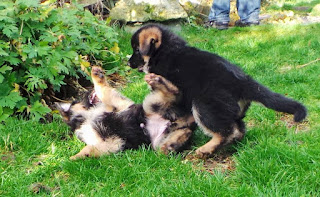 Umbilical hernias are common in dogs, we've had a few here over the years. Nikki had one, but only produced it once. Krizzie didn't have one but produced it once. Ziva and Nico don't have one but had 3 in their litter with small hernias. (though Sammi hasn't got one) Though some of the younger vets make a big fuss about them generally breeders believe they are not such a huge issue. I remember Jill Hubbard telling me just before her retirement that she had only seen 2 cases of strangulated hernias in her years service. Hernias that need fixing are often done when neutering.
So why does it happen? Is it 100% fact that it is hereditary or could there be more to it? Some breeders say it is down to the mother pulling on the cord during birth, other disagree and say it is genetic. I guess I've never thought about it as much as I have with this litter.  In her first litter Sammi had 2 pups with hernias.
I recently joined a Canine Fertility, Reproduction, Whelping and Puppy Care page on facebook and was fascinated to read a conversation on hernias. Some of the breeders are adamant that it is down to the mother pulling on the cord, even if like I do they cut the cord themselves. In that situation a tail is always left, and yes mum does spend time pulling at it and chewing it, so it is possible. Now Sammi had a cesarean this time but I broke all the cords as the vet continued with the surgery ... but as I later sat on the floor with a waking Sammi he went through the whole litter and cut off the tail of the umbilical cord leaving nothing for Sammi to pull at. Guess what .. no hernias, and I was expecting it this time .. but there aren't any! (To date anyway, they can suddenly appear)
I guess we should always consider the options shouldn't we. Maybe if it is genetic it needs to carry from both sides? Maybe Sammi and Merlot carry it and Sisco doesn't? Honestly I don't know, but I really find it fascinating that in the weeks after the birth that I read a discussion where people are adamant that it can be down to mum pulling on the cord, then my vet cuts the cord shorter than I would risk doing and a bitch that has produced 2 hernias in a litter of 3 doesn't produce any in a litter of nine!
Posted by Tali at 09:49

Now that's really interesting and maybe it is Mum pulling on the cord !!!!