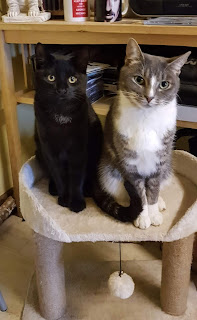 I'm not sure if Luther's behaviour after his surgery was normal, I've certainly not see it before. I know cats recover well from this minor surgery but he seemed to have the devil in him last night. He was ridiculously hyper and poor Perry got fed up of his taunting and went into hiding. He then turned his attention to Jamie, who without exerting too much energy gave as good as he got. Seemingly ready to settle he came onto my lap, but it was not the case and I was then the subject of his torment.  Maybe after a full night locked in the kitchen and a day in a crate at the vets that he just had too much energy? If that is the case then one thing is for sure he could never be a house cat, he'd drive you insane!
I'm still feeling totally deflated about Kaiah. I will her to leave her breakfast, to show me something, but she doesn't. I'm trying not to be pessimistic as I know full well that bitches can surprise owners after day 35, and some even later. I got so ridiculously low about it last night that I felt such an emptiness, I would go so far as to say I felt a feeling of loss. It all stemmed from a simple question from the stud dog owner .. "Any news?"  When I said no she showed concern and said that she really should be showing something by now. I looked back through my notes and during the 4th week Sammi had a discharge, pink nipples and left quite a few meals. Classic signs of early pregnancy, I swear Kaiah is showing nothing. I haven't got such detailed notes on Ziva and Asha but I know neither had any abdominal enlargements till after day 34 and of course with Sammi's three she didn't show any till about day 42, but she did show clear signs of pregnancy. 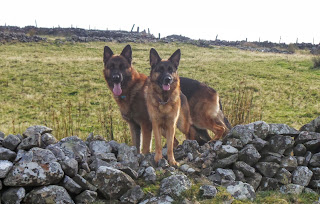 Of course I'm being pessimistic too soon, of course there is still time for her to spring a surprise on us, 4, 5 maybe even 6 days, things can change and alter so quickly. But I can't help how I feel, I can't help but think that there is nothing there. Sadly it is who I am .. and maybe, just maybe in the long run it's better for me to be prepared, to be cautious anyway. I was just so convinced on Wednesday evening that she was pregnant, so happy, honestly on cloud nine but by yesterday afternoon I felt totally the opposite .. and even the pendulum has stopped spinning!
Posted by Tali at 09:19

Hope by now Luther has calmed down. You must be feeling low over Kaiah and just hope that she is but strange the crystal has stopped spinning , I've still got everything crossed for her