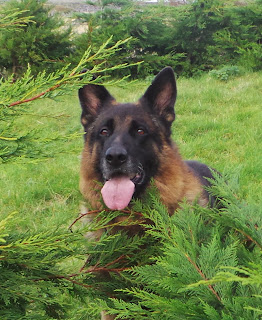 I've had another stud enquiry for Nico. The bitch has just been health tested and the owner was optimistic about the results. She is a bitch I and my friends know from the show ring and she is well bred being an Elmo granddaughter. They hope to breed from her in the Spring. I have told them that Nico will be going on for nine by then and should they want to use him then they can pay me on conformation of pregnancy and not at the time of mating. I feel that is only fair all round, Nico is getting older and I don't want to make commitments I can't keep. I just want to treat people as I would like to be treated myself.
Which brings me to the next stud enquiry .. I was expecting someone here about 10 days ago.. I bent over backwards to help them and as we know each other I offered the same deal even though I wasn't going to do that until he was nine. On day 7 they were preparing for an idexx test, on day 14 they still hadn't done it and I suggested they do it ASAP ... and that is the last I've heard from them. Now don't get me wrong, if they have changed their mind, well that's fine, if they have used another dog, it's their choice, if they have decided not to breed well so be it, but surely it's only common courtesy to let me know? All I ask is to be kept in the loop, damn right rude to keep me hanging I think .. don't you?
One of my friends in another breed was shocked to hear how little stud fee we charge in GSD's. In her breed the average is the price of one puppy, in GSD's it's about half the price of one puppy. I've never questioned it really .. different breeds, different ideas and far more reputable stud dogs in my breed than hers which is numerically much smaller. 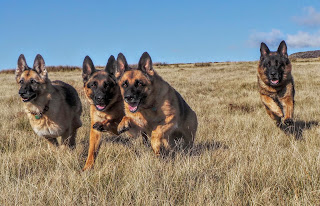 Nico is still fit and well and I have no reason to believe that he should not still be available at stud to bitches who pass my criteria. I would love to see just a couple more litters out of him and hopefully some progeny in the ring. Even if I say so myself, to date the health tests of his progeny are fantastic. The latest Ylanris Paloma who got her results last week - Elbows: 0, Hips: 7/6, DNA clear for DM PD MDR1 HUU, Carries long coat.
I love this photo of Nico trying to keep up with the girls .. no chance mate .. you are just a boy!
Posted by Tali at 18:54