There's A Rat In The Kitchen 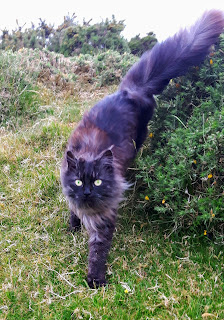 Oh Ok, not in the kitchen, in the middle room. The joys of owning cats and having a car flap eh! We knew something was amiss as the dogs kept pulling at the carpet underneath the radiator. So being the coward I am I left Steve to investigate. The young rat legged it across the room away from the hoover ... and was immediately killed by a GSD. Nico or Jezi? My money is on Jezi. Anyway thanks cats, and I bet you it was Isla that caught it in the first place! I'm quite use to finding bodies or even bits of bodies in the room in the morning, but their lost prey is no fun!
It looks like I'll have to be more on the ball with Tali and her toileting. First time in 12 years she's had a poo on the carpet. I had let her out once, but it looks like she may now need to go out after her breakfast too. Talking of breakfast ... she's still not keen on eating in the morning so I guess I'll have to add fish to that meal now too. It's important she eats in the morning as she needs her steroid with food. 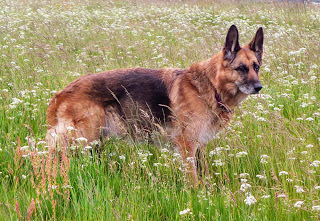 With the weather being appalling this morning I only took the dogs to the fields, they have fun and don't mind occasionally. I took Tali on her own at the end and she went all the way round .. in front of me! Tali being in front and not up to no good behind me is rare enough, but to find her regularly looking back to see I was coming was quite a shock. Her mobility is not much better, she's still lopsided and unsteady, but from what I've read of the recovery of some other bitches she's doing really well. (and I do mean bitches as apposed to dogs - strangely it seems to happen a lot more in bitches!)
Posted by Tali at 12:48

So glad Tali showing her usual spirit. Often think hoomans suffer more when their beloveds are poorly.They soldier on, adapting to changes, its us who worry sick!
I too found a dead rat on my grass, whether it was Tasha or Katurah's cat, I dont know, but I have my suspicions!!! x Thanks again for wonderful pictures from u and Linda.

so happy tali is out and about on her walks .omg you had a RAT no chance would i try and find it i would pack my bags and move haha