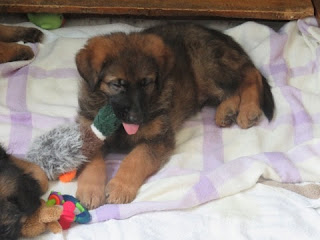 I'm feeling so deflated tonight that I just burst into tears as I sat here looking at puppy photos on the laptop. It's too late not to be emotionally involved, watching him grow week by week and praying he'd be coming to join us, I'm already attached, he has my heart. Stupid as it may sound I touched the screen on the laptop and wished he was in my arms. I wondered how wonderful it would be to hold him .. and I sobbed my heart out. Steve is sympathetic, but very matter of fact. He feels no attachment or involvement in a puppy he hasn't met. I guess he's sad for me but doesn't really understand why I'm so emotional. You'll have to wait and see is all I get from him, Oh hell I bloody know that, if anything could be done then it would be done, but sometimes it's only your nearest and dearest that you want to lay yourself bare to isn't it.
Now I'm feeling really disheartened, I just can't see that this dream will come true. Yes there are other options, back up plans but that's not what I want, that's not the dream, he is the dream he has my heart. The owner of the sire visited the litter yesterday, she messaged me and said how wonderful he was. She said "he has everything!" Well I guess almost!
I could just go for it and buy him, but without him being entire that simply would not be logical. I would not be able to show him, I would not be able to breed from him and I would not have the space or finances to bring another one in as well as him. I could buy him and give him a few months to wait and see what happens and if they don't descend I could sell him on .. Oh yeah, I can see me being able to do that .. NOT!
Typically both his brothers testicles have now descended. Next Thursday is crunch time, if his testicles have not descended or at least moved closer to where they should be then he will be going to a pet home and what a travesty that would be!
Posted by Tali at 20:00

Understand completely.Had to wait two weeks for Tasha to arrive, and I couldn't stop thinking about her.All I would say is none of us can see the future, Life is what happens when u are busy making other plans!!!! If u did bring him home, are u never allowed to have a puppy just because u love him and have bonded emotionally already???
Understand all your arguments against, but the devil in my brain says, so what!!!!!!
All the years u have done everything in your power for Blanik, how about something for U.Cxxxxxxxxxxxxxxxxxxxxxxxxxxxxxxx